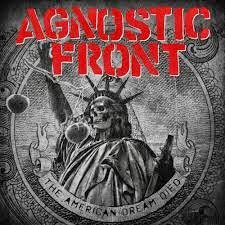 On the legendary bands 11th full length studio album. Agnostic Front, a NYC institution as recognizable as the legendary Katz's Deli,
tackle issues that are as time tested as they are current. Songs about police brutality, injustice, the scene and war,
to name just a few.
Subject matter that was as relevant in the 60's as they are today.

The 2:01 intro featuring doom and gloom news soundbites and sirens introduces
The American Dream Died like a tried and true Hardcore clique. The end is nye, but first, a sound bite. The albums title track follows and your immediately reminded of Agnostic Front'a history of relentless, unapologetic crossover aggression. For better or worse. Love them or hate them. Agnostic Front have more than earned their reputation as the Godfathers of NYHC as well as the Mad Max's of
Road Warriors.

Stellar tracks on this 16 song bruiser include and are somewhat limited to Police Violence, Never Walk Alone. Old New York, the albums 10th track, might make one long for the days when NYC was awash with junkies, pimps, murderers and abject poverty. A time that many, including myself, look back on fondly. Preferring the stark contrast to the current sea of soulless high rises, franchises and yogurt stands.

No disrespect intended  but, listening to Roger Miret sing is like watching Guy Fieri cook. Unfuckingbearable. And while his caterwauling was the catalyst for what AF were to become and to be. That voice, along with the bands music. Just doesn't speak to me the way it did so many decades ago. it might have worked for me in the early 80's, more than 30 years later. I'd liken that voice to someone retching over a public toilet. If there's any saving grace in all of this. There are a couple A list guest appearances by Lou Koller (Sick of it All)
Freddy Cricien (Madball). Toby Morse (H2O) also makes an appearance.

Overall, listening to The American Dream Died reminded of when I first hear
Cause for Alarm. and to be more specific Every album that followed. Lucky for me, none of these 16 tracks make the three minute mark. James Damion

Nuclear Blast  Get it Here

Related; Agnostic Front - No One Rules
Posted by James Damion at 8:56 AM