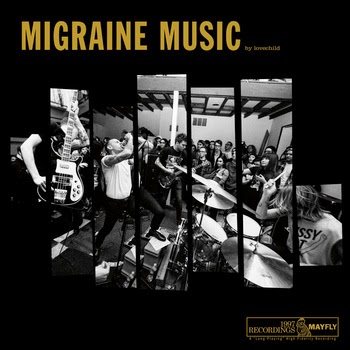 Imagine my surprise when
I received an email from
Mayfly Records stating that the record I preordered back in October of 2014 was finally on it's way. As I arrived home today, "Migraine Music" was waiting to welcome me home.

Featuring a mere five songs, less than half of the eleven featured on their 2014 debut 7' "Everything is Fine, in Heaven". Lovechild manage do just as much damage, if not more on "Migraine Music".

The Boston MA. band formed out of the band Cerse in 2013 produce a venomous Hardcore Punk sound that ranges from a fast forward hyperactive attack to a stuck in cement, sludgy pace. The record opens promisingly with "Most Weekends" One of the three songs featuring spoken word samplings. "Colder Winter than Usual" perfectly sums up winter in Boston with it's metallic leads and psychotic vibe. The kinda of sound that could inspire the mental breakdown Jack Nicholson perfected in the horror classic "The Shining". Each of the five songs featured on "Migraine Music" work to cast a long shadow on this listener. In an admittedly short span of time. Lovechild have shown a great deal of growth and an ability to mature while staying true to their sound and overall style.

Aside the exorbitant amount of time it took the pressing plant took in producing this record and the fact that it arrived with noticeable damage to it's cover. This short, yet powerful blast of rage proved worth the wait.  This is a limited first press of 500 copies.
(400 Black / 100 Gold. So get them while they last. James Damion