There's a scene in the movie Goodfellas where Tommy DeSimone comes to visit Stacks Edwards. As Tommy puts his pistol to the back of Stacks head he says "You're always late. You're gonna be late to your own fucking funeral." However violent, that statement sums up my history with reviewing new releases. Regardless of opinions, good, bad or indifferent. There's always a bit of room needed between my catch and release moments. 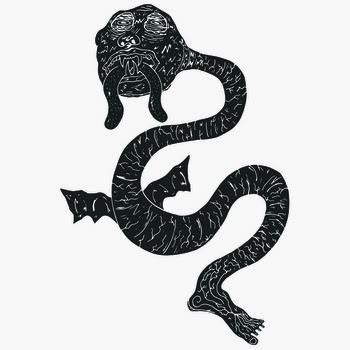 So with a recent record release show at Jersey City's latest venue The Dopeness still ringing in my years. I began to double down on NGHTCRWLRS self titled debut album.

Though somehwhat new to New Jersey's music landscape. The bands personnel have been making noise for years in acts such as All Sensory Void, Holy City Zoo, Lake Effect,
Nico Blues, Man on Fire and Washington Square Park.

On there 8 song debut the band does an excellent job distinguishing themselves with a variety of styles and approaches that allow them to escape the trappings that many bands seam to be falling into these days. Upon first listen you get a feeling that NGHTCRWLRS were hell bent on creating songs that each had a unique feeling and personality. And while the name NGHTCRWLRS might illicit thoughts of axe wielding serial killers or knuckle scraping Hardcore bands of the past. The bands sound and approach is more harmonious than such imagery could ever accomplish.

The album opens with "Smiling". A song that is spacious, spacey and all together spaced out. It's "Turn on, Tune in, Drop out" vibe feels as if it were born out of a 60's inspired LSD trip. Lasting side effects aside. It introduces the band properly. A mission that lets the listener know they're in for something different from what they might expect. "You're Living the Life" follows with it's repetitive, yet addictive chorus. Upbeat and uplifting to the point where I found myself singing the chorus long after the song and album were done. And while there are several other favorites Red "Beans and Rice", "The Amish Don't Wear Jordans" and the flat out weird "Homies".  It's the overall product that sticks out most. In order to surrender to the trip. You have to be up for the entire ride. In closing, NGHTCRWLRS debut was nothing
I ever expected. Yet, everything this listener could ever hope for. Get weird. Stay weird. James Damion