As much as Essex County's Archie Alone have quickly become a must see live act.
The band has also come to serve as torchbearers for a burgeoning New Jersey
Punk / Hardcore scene. Merging melodic Punk with metallic riffs and emotive vocals.
Archie Alone have quickly earned favorite status with this particular blogger. Since my initial experience with the quintet in May of 2013, I've had the pleasure of seeing the band numerous times at venues including ABC No Rio, The Court Tavern and their home base in Montclair, The Meatlocker. In that time, my curiosity, as well as my appreciation for the band have grown considerably for the band. After a recent show at Paterson's WPCS Radio. I decided to speed up the interview process and have the band fill in the blanks while answering some of my curiosities. Thanks to everyone in the band for participating.
James Damion

James: My experience with and knowledge of the band only goes back as far as the
Spring of 2013. Can you tell me about how the band started and how long before
Archie Alone took shape?

Archie Alone: Since originally forming in 2008 the band has had an ever changing lineup.
In Spring of 2012, that lineup consisted of Nicole Mesce (vocals), Tony Mastrolia (bass), and two former members. We took on guitarist Cindy Ward, whom we had met while playing with her previous band. Shortly after Cindy joined the band, Nicole suggested her friend,
Pete Lepore, as our second guitarist. Thus filling the vacancy. After playing throughout the Summer and Fall. Our drummer decided to leave. His position was soon after filled by
Pete Clark, a former band mate of Cindy's. Since our first show in January of 2013,
the lineup has remained the same. 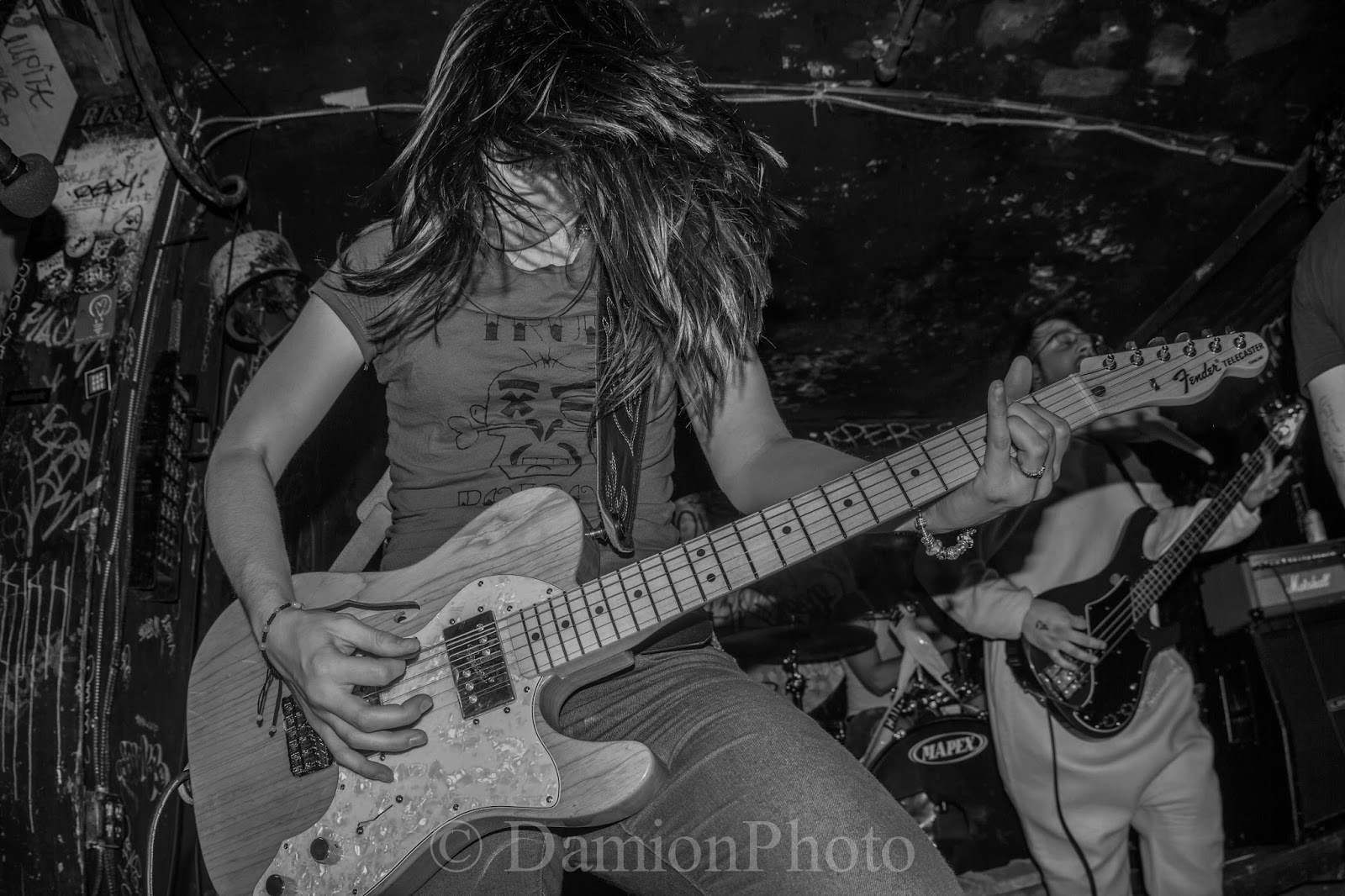 James: You mentioned Cindy was in a band prior to coming over. What was the bands name? Are they still playing together?

Archie Alone: Cindy was in a Metal-core band called Fantazma. Our current drummer Pete Clark actually joined them towards the end of their run. Fantazma has since called it quits.

James: Cindy, a few months back I began hearing about a side project.
Can you tell me a little about the band and how it differs from Archie Alone?

Archie Alone: This actually ties in perfectly with your prior question. Cindy's side project ironically consists of members that were all at one point in Fantazma. The new project is called Sightings. Pete Clark plays drums for them as well. The best way to describe it is alternative metal/hardcore. The genre can be pretty ambiguous at times. It differs greatly from Archie Alone primarily because it is heavier music with female screaming vocals.
It does compare with Archie alone however, in that it's aggressive and dynamic.

James: The name makes me think of two things. Old Archie Comics and Archie basically taking things into his own hands. Does the name hold any meaning to you or was it just something you pulled out of your hat? 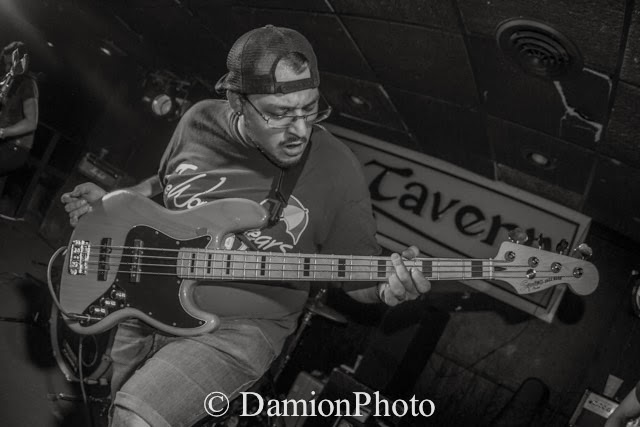 Archie Alone: The name of the band actually came from
Tony's brother who had suggested it in passing.
When the time came for us to record our first demos, the sound engineer we were working with needed a name to put on his schedule so we used Archie Alone as a fill in for the time being. Its stuck ever since. The name "Archie Alone" comes from an episode of Archie Bunkers Place, a
spin-off of All in the Family. In the episode Edith, Archie's wife, passes away.

James: Back in the Summer we spoke briefly about an album and
(my hopes of a vinyl release.) In recent months I've heard talk about you recording.
How far have you come? How long before we get our greedy hands on a copy.

Archie Alone: We started recording late fall of 2013 and hope to release the full length in late Spring of 2014. We are shooting for about 10 to 12 songs and will be pressing them on CD's as well as availability online (iTunes, Spotify, etc.) Vinyl would be a nice addition in the future but we have no current plans on it.

James: The first time I saw you live, I was there to see Nick Lee and Moon Tooth.
Since then you've toured with them and Polyphony. How did that come together?
What were some of the highlights? Lowlights and shameful moments?

Archie Alone: The first time we met Moon Tooth was at the show you mentioned at
Dingbatz in Clifton, NJ. We took a real liking to them musically and personally.
We collaborated with them and played a few shows here in jersey and Long Island.
As for Polyphony, we met them through practicing and playing at the Meatlocker in Montclair, NJ. They are also a great group of musicians. Through getting to know them we decided to do a mini weekend tour with both of them. A few memorable moments with
Moon Tooth were hanging out here in Jersey, making them breakfast after a show at the Meatlocker, and other "extra curricular" activities. A lowlight of the weekend tour with the three bands was when Polyphony got "shunned" to the upstairs part of the venue we played in Philly due to the fact they're not all 21+. Luckily they still got to play, but they were not allowed to watch any of the bands because there was a bar. We all laugh it off now but it was definitely a bummer when it happened.

James: Your sound is self described as Pop Punk, Melodic Punk and even Alternative, Personally, I hear a lot of Metallic riffs coming from Cindy's guitar. It kind of gives the band a sound those genres rarely deliver. Is that trait something that creeped it way into the bands sound over time? Or was it there from the very beginning?

Archie Alone: Yes, heavier, more metallic guitar parts. Elements that gradually made their way into the band. Especially since the additions of  Cindy and Pete. Their influencs by heavier genres of music definitely played a part. Pete's influences consist of Have Heart, Strung Out and Wilhelm Scream amongst others. Cindy, on the other hand, has experience playing heavier music in her previous band which, thus, carries into Archie Alone.

James: How are the song writing duties distributed? What about the lyrics? 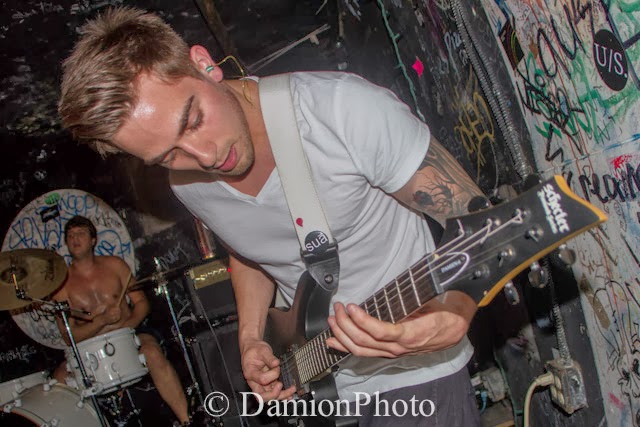 Archie Alone: Pete Lepore, our guitarist, comes to practice with a piece of music and we will all jam on it until we reach a common ground. The song gradually develops over time while going through trial and error with parts that work and do not. With each practice, we bring in new ideas that further develop and give the song more character. As far as lyrics go, they are all written by Nicole, either premeditated or as we write the song.

James: Nicole is one of the most powerful vocalists I've seen in my days. It seems she pours every ounce of energy, sweat and emotion into every performance.
Where is a lot of that coming from? Does it ever take it's toll? 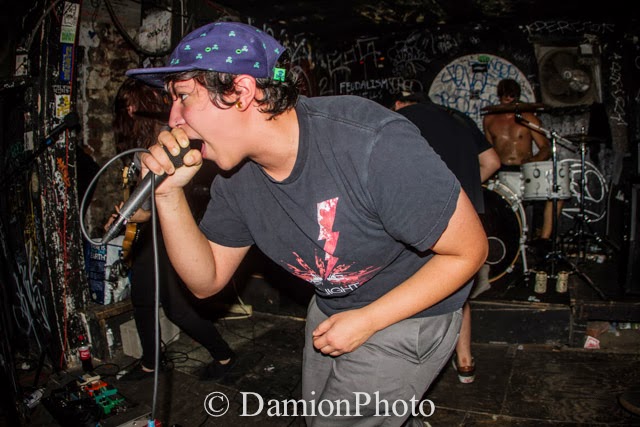 Nicole: First of all thank you, that means a lot. The earlier lyrics that I wrote were based on the past and how I felt at the time. As Archie Alone progressed so did the feelings and emotions that I wanted to discuss. For me personally it's been a realization of my past events and how they do not define me; It has been more of a discovery of who I am as an individual. My main goal is to have people relate not to the specific situation in the song but to the specific emotion in the song. I want it to be personal and relate-able for the listener and the things he or she goes through. Mostly, it helps me theoretically, perhaps because I grew up listening to bands like "Saves the Day" and and even "Title Fight" who have influenced me to write with my emotions.

James: Montclair's Meatlocker seems to be a home away from home for the band. What are some of the benefits and drawbacks of playing a place so often?
Does the crowd change much depending on who you're playing with or does it stay relatively the same? 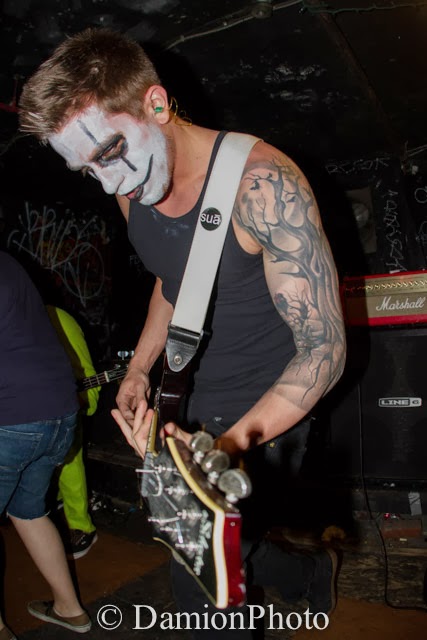 Archie Alone: The Meatlocker is absolutely our home away from home. We're always there whether we're practicing, playing a show or attending a show. Cindy also books a lot of shows there for touring bands as well. We benefit from playing there because we have met so many great people and bands who we have established friendships with. The shows are always a blast and low-stress.
The drawback may be that sometimes it's the same crowd that is seeing us. While the crowd does change depending on the type of show, there is still a built-in crowd that is typically there every weekend.

James: I couldn't help but notice a rather large SUA button on Pete's guitar strap. I've been a fan of the band since they were called Jellybean. Actually saw them play with Nick Lee's old band Exemption. How do you know them? Have you had a chance to play out with them?

Archie Alone: Pete Lepore knows SUA through his friend Leigh who he met while attending IAR. We have played with them once at a house show in New Brunswick.

James: You've got a big show coming up with Dingbatz with Such Gold. Tell me about that. 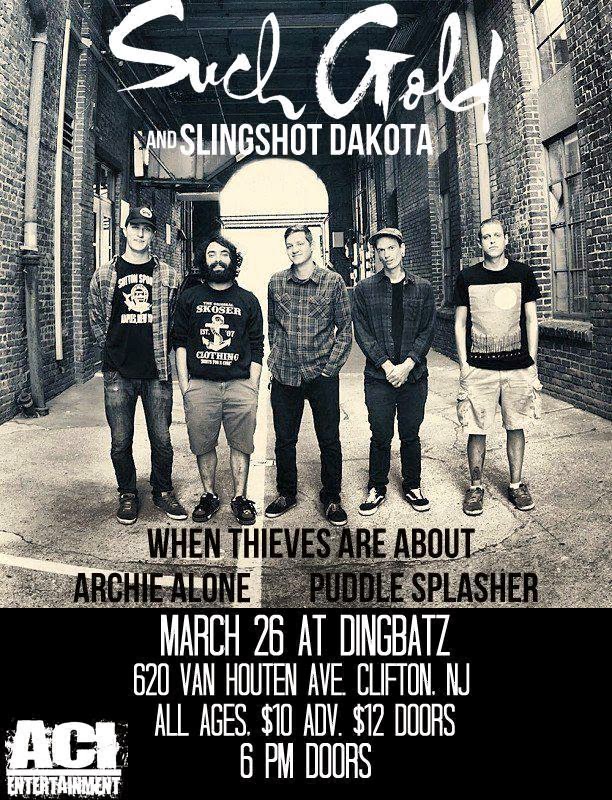 Cindy: Yes we do! We are really stoked about this one not only because we all are big fans of Such Gold but it's a show that we finally feel like we fit well on. It is an honor for us to share the stage with a band that we take influence from. Shout out to
Anthony from ACI for making this one happen. We are currently working on a tight set which includes a new song that we just finished. We are really excited to show everyone the new song because we feel like it defines us most as a band.
We hope to continue in that direction. Looking forward to seeing everyone at the show!