Re-post of my Wreaths review from 2013. The band had self released their s/t album digitally and made a handful of homemade cd's, but now have gotten an official cd release through the mighty Killing Horse Records...Do yourself a favor and buy a copy of this exceptional debut album from Wreaths and support them live. You will not be disappointed...Dave G 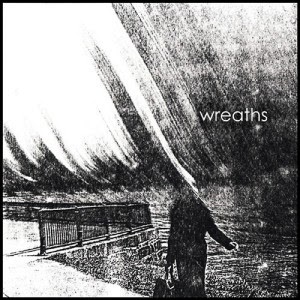 Wreaths have been my  favorite local band for a few years now. I've seen them numerous times all around NJ and I have had a few mix cd's etc that the band have given me over the years, and I pretty much loved everything I've heard.  The bands brand new self titled Lp is full of all the songs I have heard live and likely in different stages of development on those mix cd's, but I have to say hearing the songs as a proper collection is a bit mind blowing.

Musically Wreaths songs are an intricate interweaving of psychedelia  and 70's alt rock (Eno comes to mind) with a modern twist. I find the songs to be somehow soothing yet invigorating at the same time. Wreaths create one hell of a good vibe with this album and I am glad they brought me into their musical universe...An absolute top 5 album for 2013 in this listeners opinion..Dave G.