I was asked to do a year in review by good old James Damion of United By Rocket Science, and was more than happy to do so. When I asked him exactly what it was he was looking for, he replied "Just talk about new music from the past year, shows you attended and whatever moved you." 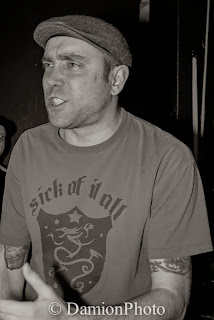 Well, the most memorable show for me this past 2013 was Judge reuniting for the first time in
'God knows how long'.  The band headlined two nights at Webster Hall in New York City last May for the Black N Blue Bowl 2013. I flew up from South Florida that Thursday to actually attend a wedding that Friday night. By flying up earlier guaranteed me extra time to spend with friends and family. The universe lined up in my favor for me on this weekend. What I mean by this is, that I was able to attend a close friend’s wedding and go to a memorable show in that same weekend.
I was only able to attend the Saturday show at Webster Hall due to me flying back to Florida that Sunday evening. That was good enough for me.
I can say the only thing that bummed me out, not attending the Sunday show,  was not being able to see Kill Your Idols. The last time that I saw them perform was during the days of Coney Island High. The highlights of the Saturday Judge show were Altercation, Black Train Jack, Breakdown and Judge. The lowlights of the show were the over priced beverages, the venue being too small for an event of this magnitude and  that is was too fucking hot inside. The "cherry on top" was being extremely hung over from the wedding the night before.  The best thing about that show obviously was getting to see Judge perform.  Almost everyone in that place was singing along with Mike as he brought those songs back to life. It felt like we were part of something special. Especially since this was the first time they have performed in years.

As far as new music goes; there are some bands, though not all that new to most, are to me. Bands I feel worth checking out. One group I'm really psyched about it is a Hardcore band from the West Palm Beach area of Florida called Old Habits. They currently have a record out on Eulogy Records titled 'Bury Everything'. Let's just say that ever since I picked up this album, it hasn't left my CD walkman. (Yes, I still use a CD Walkman.)

The second band that I can mention comes out of the Orange county area of California called Done Dying.  These Hardcore veterans put out an EP in 2013 on Reaper Records titles 'Dressed For Distress.  This EP certainly relates to people that are my age and older and that is because of  Dan O’Mahony's (No For An Answer, 411, Speak 714) singing about what's going on in his life right now at his age.  Getting older isn’t always pretty, but
Done Dying has put out a pretty damn good EP.

The third and final band I came across this year is  House of Others and I tell you, they are fucking rad. They have an all star line up of New Jersey’s Hardcore’s finest. Consisting of former members of Vision, Shades Apart, Ensign, Damn This Desert Air, and
The Fire Still Burns. House of Others  came to me from the bands guitarist Peter Tabbot. I had used it on the playlist for episode # 62 of The Sixth Borough Radio Show. Peter was the musical guest for that episode and at the time, on the show told me about his involvement in the film/documentary 'Riot on the Dance Floor'.  The film/documentary is about the legendary Trenton New Jersey club known as City Gardens. I was told it should be ready in the Spring/Summer for the film/music festivals.

Finally, what has moved me most is something James had asked me to talk about. I am not really sure that I can at this moment. What I will talk about is how I really miss being around my family. How having music, especially Hardcore, made making the transition a bit easier. So, as Raybeez would say, "KEEP THE FAITH". Because, no matter how much garbage music is out there, there is always something good or positive to help you keep that faith.

Cheers and take it ease in 2014.
Brian Macko