Black Flag is back with their new album "What The..." featuring founding member Greg Ginn with the band's second vocalist Ron Reyes. "What The..." is a musical return to form for Black Flag, it's tight, fast and aggressive despite the fact that it sounds like they're repeating themselves. 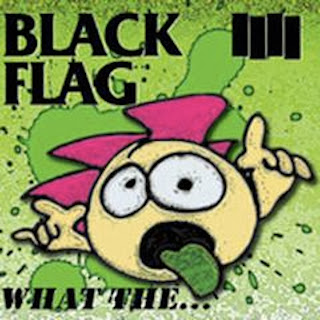 Redeeming moments are found in'The Chase', 'It's So Absurd' and 'No Teeth', but the album as a whole is very disappointing.
Greg Ginn's guitar work is snarly and satisfying when he makes it scream and Ron's yelling sounds as good as ever. The quality is alright, everything is audible, however the songwriting is lackluster.
'My Heart's Pumping' would be more powerful if
'Slow Your Ass Down' was omitted. It's the same deal with 'Down In The Dirt' and 'Blood and Ashes.'
Also, "What The..." has the weirdest cover artwork I've ever seen on a Black Flag record.
It looks like a South Park character rendered in MS Paint in 1996.  All in all, I wouldn't recommend picking it up unless you're really clamoring for some new Black Flag.
Paul Loza

Find it Here
Posted by James Damion at 4:49 PM