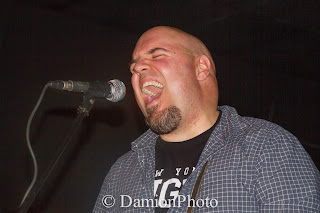 My name is Jerry, and I play guitar in a band called
The Brixton Riot.  We've been together for seven years, so we've lasted longer than a lot of marriages.  We're all pushing 40 and have full time jobs and families.  Our songs tend to be loud and uptempo, which finds us in the uncomfortable demographic of too loud for people our own age (they don't ever go out anyway) and too old and ugly for the young people who question why we're not at a Lowe's or watching UFC with the other dads.  We don't use copious amounts of reverb.  We don't sing falsetto.  We don't wear V neck t-shirts.  We don't have facial hair, at least not of pre-Civil War length.  We're about as uncool as you can get and we have a lot more fun then we probably should.  Our moms probably think we should have outgrown this phase.  Not happening anytime soon.

One of my favorite things about this time of year is the steady stream of best of lists by the music press.  They're always a good place to search for hidden gems that I missed over the last 12 months, or to be reminded of some of the earlier contenders that got lost somewhere between season changes.  But lately, there seems to be a lack of diversity in a lot of the more popular music blogs and websites, even the ones that claim to be "independent" (a term that has about as much meaning in 2013 as "alternative" did in 1995).  I knew when they were released that records by Arcade Fire, Vampire Weekend, Daft Punk would be dotted across a lot of these lists.  And they were.  Of course they were.

But not mine.  In fact, this isn't really a best of list at all.  It's a little silly ranking albums like basketball teams in a bracket.  Other than the actual notes and melodies, there's an emotional subtext that resonates with each individual listener, and trying to tell another person what they should feel is a fool's errand.  So this isn't a true "best of list" as much as it's a list of musical items that resonated with me in 2013.  I'm flattered that James asked me to write this, and since you made it this far, you might as well read the list now.

Favorite Album of 2013
Superchunk's "I Hate Music"
Picking favorites may have been hard, but #1 was never in question. Superchunk's "Majesty Shredding" was my favorite record of 2010 and its follow-up tops my list this year.  Great songs, great production and great performances. Not a bad track on here.

Favorite Album By A Band From Brooklyn - "New Moon" by The Men
For the second straight year, The Men have produced an outstanding, completely unpretentious guitar rock record.  And coming from Brooklyn, that's quite an accomplishment.
New Moon

Favorite Actual Reissue:
The Verlaines' "Juvenelia"
Having been very late to the party, I only discovered Juvenelia a few years ago, but it's become one of my favorite records.  Looking forward to getting an "honest" copy.
Juvenelia

Favorite Album That Made Me Want A Baritone Guitar:
Bottomless Pit's - "Shade Perennial"
Despite being a Bottomless Pit fan since "Hammer Of The Gods", this was the year I first listened to Silkworm, the previous outfit of BP's Andy Cohen and Tim Midyett.  And I listened to them A LOT. If the rules allowed me to pick albums from previous years, 50% of them would likely be Silkworm records.  I've loved everything Bottomless Pit has put out to date and this is no exception.
Shade Perennial

Favorite Album From A New Jersey Institution:
Yo La Tengo's "Fade"
It's definitely on the quieter side of their catalog, but I really enjoyed the sound of this one.
Fade

Favorite Album Discovered Too Late For Summer:
Upset's  -  "She's Gone"
This reminds me a lot of some of my favorite female fronted 90's bands - specifically Velocity Girl and Sleepyhead.  And that's definitely a good thing.
She's Gone

Favorite Live Show:
Screaming Females at Maxwell's
Nobody really wanted to say goodbye, but I'm glad my final memory of Maxwell's will be watching this New Brunswick trio blow the roof off the joint - and watching my wife get completely blown away by her first Screaming Females show.