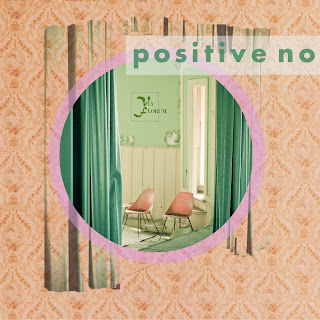 Dreamy uplifting pop that reminds me of a lot of the great acts that sprung up in the early 90's and at times, even
April March. Richmond's Positive No allow the tongue to release the term "Indie Pop" without ever having the urge to bit it. Tracy's voice is a pure slice of heaven.
Warm, summery and downright positive. Hinting at a sense of hope and optimism that lifts the spirits. Each of Positive No's five tracks invite themselves in. Perfectly melding dreamy pop with elements of shoe gaze. For those familiar with
Tracy Keats Wilson.
Positive No is more akin to what she produced with Dunebuggy than her work with her work with Dahlia Seed and as Ringfinger. Though recorded just as the arctic apocalypse began to roll in. Positive No is about as warm and summery as they come. Recorded by the legendary J Robbins at his Baltimore studio Magpie Cage. Isn't is cool when one of your favorite records of the year comes just as it seems to be coming to an end? James Damion