Lamplighter is a New Jersey based magazine and media outlet that covers music, art, poetry, nightlife and alternative culture. As the magazine prepares to publish their third issue. I got to talking to the magazines editor and publisher Patrick Boyle the magazine's focus, staff, challenges and success. Thanks to Mr. Boyle for sharing his thoughts.
James Damion

James: What was the inspiration for Lamplighter? Did you know what the focus would be from day one? Or was it something that developed over time?

Patrick: The inspiration for Lamplighter... Let's fly way back to August of 2011, a few months after I had just graduated college, applied to a bunch of jobs, and found no employment. I was without a substantial writing portfolio and needed to write regularly about something I could access easily. At school, I ran Jersey Fresh, which was a radio show on WPSC playing only NJ / NY music. So, for me, writing about the local music scene
(and other NJ-centric culture) was a cake role to step into.

I guess it wasn't so much inspiration that brought Lamplighter into existence but desperation. The project started as just a website where we
(me, Dhru, Megan and Nadia) could post articles and build our writing portfolios.
Eventually deadlines and reality set in, and the upkeep was too much, so we expanded into the magazine format. But regardless of the iteration, the focus never changed--we are just as we launched. 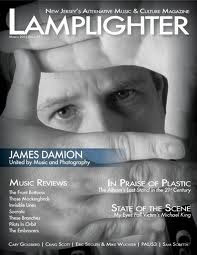 Our focus, or manifesto, ignoring things like content categories, is to be a centralized roof under which the community can gather and see/experience/discover NJ culture. We're an amazing state stuck between places of pilgrimage, the "cultural centers" of New York City and Philadelphia. Lamplighter exists to show people there are great, fun, intelligent, thoughtful, musical, artistic happenings in NJ and that paying $7.50 for a bus ride to NYC is 50 cents short for cover to see awesome bands play in the next town over.

James: What meaning does the name hold for you?

We, Lamplighter, exist in a space where culture and its content/context fly by as fast as seconds tick away on the clock. People are blinded by opinions, desensitized to savoring because..."well it got a bad review somewhere so it just isn't any good." We want to hold the battleground and say "NO! This is worthwhile! There is substance here and you're missing it."

James: You decided to start a print magazine at a time when many of the one's we grew up with are struggling to survive or going digital. Why print as opposed to  a  strict blog or .com?

Patrick: We started a print magazine because, like I said before, the upkeep of a website was too much for four people every single day. Becoming a magazine allowed us to put ourselves in peoples' hands, expand the organization to more writers and photographers,
and really do work that we consider valuable and impressive. Plenty of people start websites--nobody starts a magazine, especially one of quality. We're the youngest in the market!
Our real competitors have been printing 10 - 20 years longer than us. I think that's a pretty big deal.

James: You've got a lot of talent working with you. Were you looking for any particular skill set or experience when finding your contributors?

Patrick: Finding people to work with / on the magazine has been unreasonably easy.
MOST of the current staff are my own friends and colleagues, and people who I didn't know before starting Lamplighter are now my friends also. I think people of talent are just associated with a community and culture focused mindset. I am very fortunate to have all of them on my team, even if only briefly or intermittently. 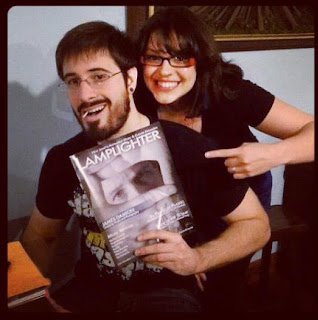 James: Over the years I've spoken to a few publishers who seemed to share a similar trait. It was their state of mind come editing and printing time.
Being that you and Nadia are in both a working and personal relationship, I was wondering if that ever takes a toll on the relationship.

Patrick: My relationship with Nadia vs Printing: Doesn't affect us at all. I'm pretty hectic and stressed as things roll closer to deadline, and I'm sure I bother people about getting stuff done, but because I do the layout, a huge responsibility is on my shoulders and no one else's. So I become more my own burden than I am on someone else working with me. Honestly, Nadia supports me through these weeks, making sure I get work done and giving me time to do it.

And that's just my life though...hectic. I work, I have graduate school, I have Lamplighter, and I have Nadia. Regardless of whether it's a printing deadline or a heavy work schedule or a paper due for school, she supports me all the same. And I think I give her the same space and support (I hope! She deserves it!).

James: What do you think has been the biggest challenge in doing a print magazine thus far?

Patrick: The biggest challenge of a print magazine has been finding advertisers.
Seriously, it drives me crazy that people will pay thousands of dollars to put ads in other local magazines that are horrible quality, and flooded with other similar ads, but won't consider an ad with us that's one tenth of the cost with half of the advertisers. If you want numbers, realistically, we could print the magazine with only 28 half page ads.
That's 28 advertisers, paying $50 each, filling only 14 full pages of the magazine.

Our downfall is being new. We don't have the time-tested quality that the other magazines have, and we don't have nearly the distribution, though we're looking to change that.
It's the position where I have to be shameless about my product and grind hard to show people it's worth believing in. 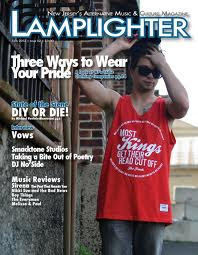 James: With two issues under your belt and one on the way. What are some of the lessons you've learned that you feel can help you in the future?

Patrick: With two magazines down, I think I've learned a ton, lots of little things, but more importantly found ways to build the staff infrastructure and streamline production. With so few people, making it work and distributing responsibilities took time to really figure out. By our fourth or fifth issue, it'll feel like a science. Keeping up communication with everyone, I've found, is key. Keep the conversation going, and it all comes together.

James: What kind of distribution are you working with. Are you using any channels beside the obvious Twitter and Facebook routes?

Patrick: Getting the magazine out into the public is tough. Again, we're young, can't buy a BIPAD number and don't want to bother with a regional distributor (because God forbid everything collapses or changes and we can't print!). Twitter and Facebook help us promote, but the website alone helps with a lot of hits straight off of Google searches.
We're also looking to be in ten or twenty stores across northern NJ for the third issue.

James: What kind of steps have you taken to insure Lamplighters longevity and consistency?

Patrick: I don't think I've taken any steps to ensure the longevity of Lamplighter. If the magazine sticks and keeps printing for years to come, I'll be thrilled because, honestly,
if I could do it every day and get paid, I'd die happy. We maintain consistency with style guides, heavy editing, and quality control work. Everything is reviewed before it goes out to the public. But even with consistency, we change a lot of stuff regularly to streamline the operation and image of the magazine. We're kind of like a teenager, growing inches (sometimes feet) overnight but "like...we're still cool, man."

James: Do you plan on keeping the focus local?

Patrick: The focus will always stay local. We might change the content we address or how we address it, but we'll always be a NJ magazine. It wouldn't be Lamplighter any other way.

Lamplighter
Posted by James Damion at 9:30 AM