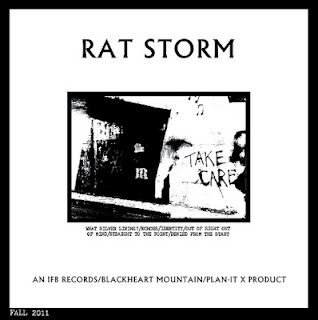 Right from the opening drum beat and rumbling bass line of this 7", before the music really kicks in the band Ottawa came to mind. Once the music kicked in I realized that my initial impression was fairly accurate, at least to my ears. For a little background, Ottawa are a fairly obscure 90's power/grind band featuring members of another obscure 90's band called Current, so I have no idea if Rat Storm ever heard Ottawa, but it really doesn't matter as Rat Storm stand on their own as a fierce  powerful grind influenced hardcore band. Musically Rat Storm do a nice job of  mixing up the tempo, and adding some spoken vocals here and there to keep the listener on their toes, and speaking of vocals, I'm a big fan of female fronted hardcore and punk bands and Nathalie of Rat Storm certainly delivers a strong vocal performance that really gives Rat Storm an edge on the competition in my opinion.

Admittedly, my knowledge of this musical genre is somewhat  limited, however, once in a blue moon a band will catch my attention and make it into my regular rotation and Rat Storm just made the playlist...Dave G.