Clifton, New Jersey's Man on Fire are a Hardcore band that caught our attention earlier this year with a few stellar shows and a record that perfectly fused some of our favorite elements of HardCore's past and present. With the bands new record "Strange Days Have Found Us" due for release in a matter of weeks. I jumped on the chance to reach out to the band to find out just what started the fire and how they plan to continue fanning the flames.

James: Tell us how the band got started and how you met.

Brian: I've been playing music with Matt for a while and we had fucked around in the basements of New Brunswick with me yelling obscenities and him playing pretty raw riffs while we were partying. He proposed the idea to that he wanted to start a punk band and wanted to do know if i would to do vocals.
I was way down. Any chance I get to make people feel really uncomfortable is cool with me.
It was orginally myself, Matt and our buddy Mike writing songs over in New Brunswick and then eventually adding Marcin on bass. Logistically we needed to find a drummer up in North Jersey and Matt had played with Dan in bands before.
He rules, so he came in and took over role as drummer boy/czar.

James: How long was it before you really began to gel? Did you originally set out to become a Hardcore band?

Brian: I'd definitely say it was when we started writing songs for our newest record.
A lot of the original EP was written by Matt and Mike, but once we started writing as a four piece things really began to take shape. We're definitely trying as hard as possible not to pigeon hole ourselves into one particular style. We all dig heavy shit and thats a huge part of what the band is; but youll notice a lot more experimental/shoegaze type influence coming in on this newest record.

James:What were some of the sounds that inspired you both individually and as a band?

Brian: my personal influences range all across the board when it comes to writing/performing; I would say the most relevant and pertinent would be Black Flag, Fugazi, Freddy Mercury, Bear VS Shark, MewithoutYou, Glassjaw, and the RZA, the GZA,
Ol Dirty Bastard, Inspectah Deck, U-God, Ghostface Killah and the Method Man.
Anyone who can give off gnarly energy that resonates to the listener inspires me, thats my favorite part of music. Just primal energy being thrown around like dookie in a drunken monkey cage.

James: The first thing that really caught me off guard was Dan moving from vocals in his previous bands (Chambers, Something About Death and Dying) to the drums. He was a pretty intense frontman. I'm very interested in what went into making that change.

Brian: It was literally Dan just being awesome and filling our need for a drummer.
He is such a huge asset to have in the band. Just giving tips for recording vocals, adding background vocals, ideas, etc. On top of that, being a sick drummer.

James: You've got another EP due out soon.  How far into the recording are you and when can we expect to hear the finished version? 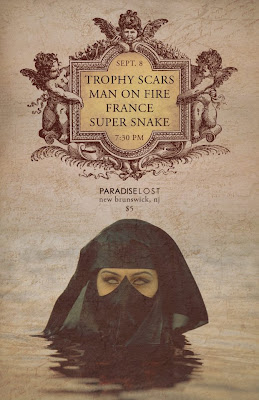 Brian: We're doing a dual release weekend with our buddies in the band "France" on September 7th and September 8th in Clifton and New Brunswick. We'll have it streaming the week before and available for download starting the 7th before we get the means to press hard copies.

James: As it developed did you see much of a musical difference from
"I Thought My Friends Were Punk"?

Brian: We definitely expanded off that sound. "I Thought My Friends Were Punk" was a building block. Figuring out what works with the elements we have in order. Once we established that we tried to push things in every direction possible on this newest record. You'll hear songs that are very much old school punk/hardcore and others that are centered around grooves and hooks. Still, there are others that breathe a little more. Experimenting with different sounds and structures.
However, the foundation established on that first EP hasnt gone anywhere.

James: Did you record at Treehouse Studios again?

Brian: Hell yeah! We did with Frank Marra, who really gave insight into how to make these songs as big as possible. There are tons of layers, huge, heavy shit all over. We couldn't be happier with where we recorded and how it came out.

James: Was there anything specific Frank (Treehouse) brought out in you or your sound that made the difference?

Brian: As a vocalist he made me feel at home. He let me drink whiskey, record shit at my own pace and he was definitely open to ideas I had as well as providing me with his own ideas that would make a part go from pretty good to awesome. I'm not 100% used to being the vocalist in a band quite yet. I was always a bassist, so it was huge to have someone with patience and insight like Frank.

James: Brian, I've noticed that you tend to cling to the mic stand when playing live. You also have no issues with taking it to the crowd. Tell me a little bit about what you're going through mentally when you're kicking it live.

Brian: I find it best to have a clear head on stage. I spend the majority of the time just feeling out the drums and letting the music take me wherever it may be. It's always fun to mix it up with crowd. Apathy can be a killer, so i take every opportunity to get people engaged. A live performance is a give and take from both the performer and the crowd.
So my mentality is,  I'm here showing you what this music means to me and you showed up to watch. So lets make things interesting. Show me you have some type of raw emotion/music breeding inside you. We're not up there playing Top 40 covers.
You came to the punk rock show. Let's fuck this place up.

James: Dan, how is law school going to ultimately effect your dedication to the band? 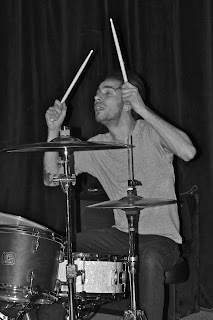 Dan: School is the priority, but playing music is obviously a passion that isn't going away. I make the time for it. Other people I know who have started law school have seen their creative exploits suffer greatly because they just don't have the energy. Thankfully, I'm managing to excel in school and keep playing. If we ever became a "full-time touring band," the current shared view is that I'd write with the band, but not tour, except as my schedule allows. School isn't so much the ultimate constraint; it's when I begin practicing.

James: Tell us about The Fort and what went down there? Are there any plans to resume shows there or are the cops keeping a watchful eye on the place?

Dan: There was never any police involvement. It was a typical Landlord/Tenant dispute with an overzealous, townie landlord "with connections." He was trying to intimidate the proprietor of the place, claiming his "buddies" at the department had the place staked out as if what was going on there was illegal. That was found to be false. Basically, the landlord didn't like his lessee using the space for what he saw as some sort of dangerous and illegitimate business activity outside what was stipulated in their commercial lease agreement. There's talk between the landlord and his tenant to do shows there in a more limited capacity but I am not and may not become involved.