About a year ago to the day I was asked by Al of Dromedary Records to document two days and three shows at Maxwell's benefitting 'Roots and Wings', a foundation benefiting those aging out of the Foster Care system. Though just out of the hospital with about twelve fresh staples in my belly, I agreed. During those two days I saw twelve bands from varying backgrounds and sounds. It was a great weekend that raised money and awareness for a very worthy cause.  This year I was asked once again to roll film but with slightly different circumstances. One night, one show and a more focused, edgy lineup. How could I refuse?
Review and images: James Damion 08/25/2012 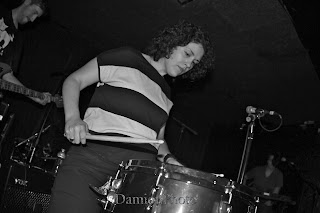 Bern and the Brights opened and although I was   unfamiliar with their music and sound.
I had heard the name mentioned frequently through reliable circles. Personally, this really wasn't my thing.
Two parts, nerdy, three parts folky and little bit too laid back to start the night off for me. Though there were definitely some beautiful moments within their set. It wasn't enough to feed my hunger for something with a little more angst and grit.
Bern and the Brights 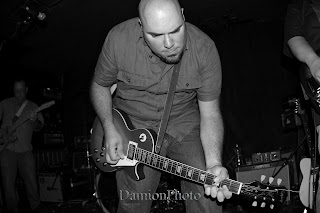 After going outside for  quick breath of Jersey Fresh air,
I returned for The Brixton Riot.
I was really looking forward to seeing these guys as I've been Facebook friends with their drummer Matt for years and had a particular fondness for their recent masterpiece "Palace Amusements".
See review Here. The band mixes a 70's, early 80's Power Pop sound with gritty influences such as The Clash to cook up a tasty sound. Their set included a cover of Husker Du's "Could You Be the One?" and were joined by Stuyvesant's Sean Adams for a Lemonheads cover. It was just the tonic needed to put my spirits back on track.
The Brixton Riot 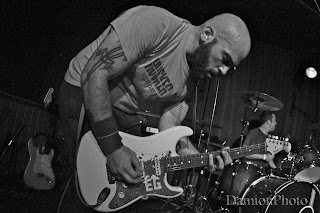 Now, during the first two bands I noticed that the majority of the folks at the show were either hanging towards the back conversing with their friends or seated to the side focused on their Blackberry's and iPhones. At one point I headed towards the stage and told Ev
(Cinema Cinema frontman) and told him "Maybe it's just me, but I don't think this crowd came here to listen to music." He turned to me and with a wicked smile said,  "I'm not worried about the crowd."
"They need to worry about me." 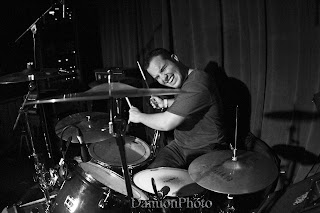 That's when I knew, it was on. I've seen Cinema Cinema a number of times in the last year and I can say, with all honesty. That this is band like no other. An act that blends beauty and harmony with dark, dark elements of dissonance. mirroring that of a spiritual possession or exorcism of demons already within.
I've witnessed people surrender to what Ev calls "The Trip".
I've seen people look on with eyes raised and jaws dropped.I've even watched as people walked away in confusion with their hands clamped tightly over the years. The true beauty of it is, nobody walks away unscathed. The band played a set that was less song to song than it was chapter to chapter. When recently interviewing the band, Ev described their sound as "Black Flag and Queen, Fucking!" I don't think I could have described it better.
The music just moves you.
Cinema Cinema 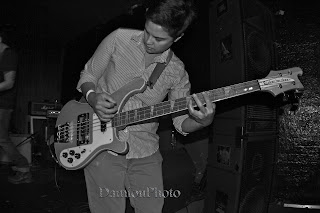 Gold Streets followed and completely knocked me and my ears on their collective asses. The Brooklyn bands mix of shoegaze, melodic 90's indie pop and various other angles is impressive and leaves a lasting impression. Just the right elements needed to calm and replenish frayed nerves the prior set may have created. It's a rare case when a band I've neither seen nor heard before moves me to this degree.
This was one of those times. I can wait to dig deeper and hear more.
Gold Streets 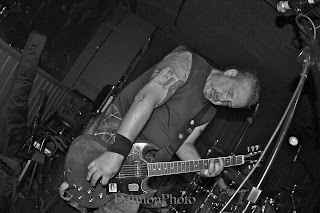 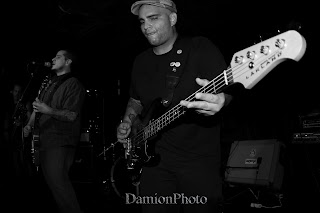 During last years Camelfest. During those three shows I witnessed a number of acts, old and new, for the first time.
One of the newer ones was
The 65's. A band Dromedary Records Al Crisafulli spoke so glowingly about. I thought he was going to wet himself. Imagine how surprised I was when they completely blew my mind. Well, here it was a year later. Having seen them a handful of times, voting their record "Strike Hard" as one of my top releases of 2011 and even attempting to interview their drunken, belligerent frontman at Six Brothers diner in Montclair. Throughout the night I couldn't help but notice the absence of their bass player Cindi Merkle. As the band took the stage I was told that Cindi was now the bands former bass player.
"Where have you been for the last %$& months?"
To be honest, I was kinda shocked. Now the 65's are pretty...... But they ain't that pretty. Though a bit disappointed, for whatever reason I regrouped and soldiered on. The band played a tight set featuring their signature grit and bar band swagger. There is a dirty goodness about this band that can't be denied. Not the kind of guys you'd leave your kids or your whisky with. That said, it was good to see them again after so long.
The 65's 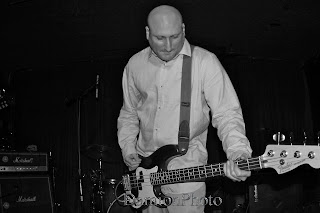 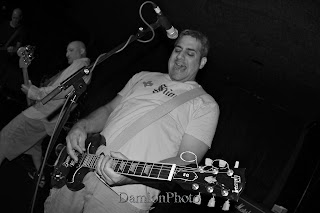 Closing out a very big night were NJ Power Pop kings Stuyvesant. Talk about putting the icing on the cake. Here is a band that never ceases to deliver the spirits in the highest form. If ever there was a band that deserved a Saturday morning cartoon featuring an updated Mystery Machine,
it would be Stuyvesant.
Fueled by tasty riffs, endless sing alongs and plenty of alcohol fueled mirth.
They are the epitome of a good time. During the set, guitarist/singer Sean Adams noted what a great representation of Rock music the night had offered.
There was something for everyone.  I could not have said it better.
Stuyvesant
A really special thanks to everyone at Maxwell's, Todd Abramson, Dromedary Records Al Crisafulli and all the bands for an amazing night. See you next year.
James Damion

To learn more about the Roots and Wings Foundation
Click Here