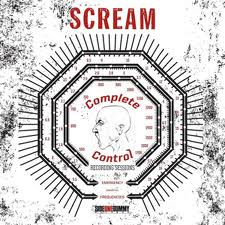 DC based legends Scream are back with their first release since 1993's classic "Fumble". Reunited in 1999 to play a series of shows including one at the DC's Black Cat during the blizzard of 2009. (Yeah, I was there)
Lucky for us they decided to head into the studio to record new material. As I pour over the seven tracks on Control Sessions I can't help but feel this is by far the bands best work to date.

Not to lessen the impact of the bands early work. Records like "Fumble" and "Bang the Drum" were epic recordings that still hold weight decades later. It's just that this record is that good. On Control Sessions
(Recorded live at Dave Grohls Studio 606 in February) the band fires on all cylinders.
It's great to see the original cast of Franz, Pete, Skeeter and Kent, along with the addition of guitarist Clint Walsh. The vocals and guitar work on the record are so good I was shaking my head in awe. All seven tracks have a "Stick to your ribs" effect but "Stopwatch" (The opening track) and "Jamin' at 606" are my absolute favorites. I'd highly recommend this to anyone. Even the most casual Scream fan can love a record that flat out "Rocks".
James Damion