Night Birds, Give, Devotion, Wet Witch @ The Acheron in Brooklyn. 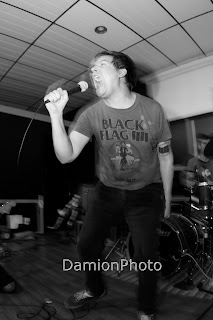 It has been a stressful couple of weeks filled with tension and angst due largely to the round the clock coverage of Hurricane Irene and the tenth anniversary of 9/11. A combination of houses floating down the river and footage of the Towers going down in the midst of smoke and  flames have put me in one of my shitiest moods ever.
So the idea of seeing on of our favorite bands the Night Birds play in Brooklyn seemed to be just the tonic to cure the mopes. As Friday approached and the day wore on I found myself constantly gasping for air as if I was going to have an anxiety attack of something. The humidity didn't seem to help  either.

I managed to get to Dave to drive in with the promise of him parking in Hoboken while we drove my car to Brooklyn. As I made my way downstairs he was standing outside the car on the passengers side. Something completely foreign to me. "Dude I hate fucking Hoboken." "I couldn't find a spot." Then came the question that turned my tension to panic "Do you mind driving my car there." Shit, I've come to terms with the fact that I'm a bad driver. I get lost or side tracked whenever I go somewhere new and often scare the Bejeezus out of my wife when we go out anywhere. I can handle that. Endangering myself, my vehicle or my spouse doesn't unnerve me in the least.
Taking a friends car and putting his destiny in the crosshairs is a different animal all together.
As I pulled out and adjusted the seat I felt a jolt and took a deep breath. Then, with the turn of the corner, all the tension and anxiety was gone and we were on out. I was psyched to see the Night Birds final show before their European tour and I was finally going to get to see DC's Hardcore outfit Give.
As we rolled into Brooklyn and finally onto Waterbury Street
I felt comfortable amongst the industrial surroundings. 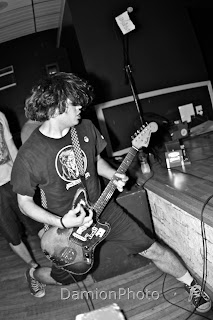 I seem to going to a lot of spots in these less than suburban settings these days. As we pulled in to our spot, Dave turned his head anxiously, "Are you sure we can park here dude?" I let him out to check the signs and even circled the block to look for a more welcoming atmosphere. Only to park in the same exact spot only minutes later.

Acheron's music space is wedged between a small cafe and the bar and makes any basement event look like a trip to the Hilton. I went into the cafe for a coke but all they had was the birch beer shit. I asked Dave if he wanted a beer but it seemed to be the furthest thing from his mind. A crowd was forming outside and it just felt like one of those bad cliche's unfolding. There were a ton of skinny white guys with long, stringy hair, Buffalo Bill mustaches and cut of dungaree jackets. They could have passed as bikers if they had a little meat on their bones. The scene was just old and smelly. The thought of waiting for two bands we had no interest in seeing out in the humid air only to go into a dirty sweat box for the bands we did want to catch just didn't seem like a good idea. Dave was also becoming more and more disconnected. Having no one to talk to while waiting for such misery was enough for me to persuade him to cut our losses and head out of Dodge. As we got back onto the bridge Dave returned to normal and realized it was a good idea. "We'll see the Night Birds when they return from Europe." I said. I'm sure it will be at a cool spot with a better vibe than tonight. 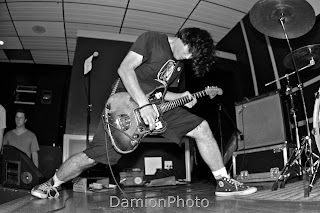 To put an end to my first "No Show" review I want to admit that writing this was just my way of posting some more of my favorite shots of Night Birds. Enjoy. James Damion 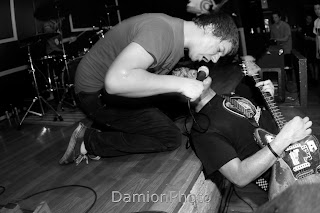 Night Birds  Band Camp
Posted by James Damion at 12:01 AM