DYS - More Than Fashion (Live From The Gallery East Reunion) 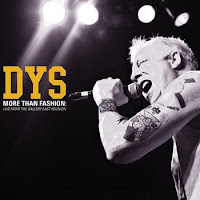 As kids growing up in the 80's bands like DYS, SSD and Minor Threat, just to name a few, were untouchable.
They were Gods that walked on water as far as this wide eyed fifteen year old was concerned. Brotherhood and even the more Metal influenced
Fire & ice were already classics.
As one of the kids that missed seeing those bands by a few years I salivated over the chance to have seen them in their heyday or owned an original copy of Brotherhood. Fast forward twenty five years and the nostalgia of movies and books such as 'American Hardcore' has a good amount of the bands from that era have reformed are touring and recording. This brings me to DYS - More than Fashion. The music is taken from their reunion show at Gallery East in Boston on August 29th 2010. Looking back I really wish I would have taken the invitation to join Dave Stein and friends for the bus trip they took to this show. I'm sure it was memorable to say the very least. As for the record. It covers much of the bands material from both records rather well Dave Smalley and crew are in good form. However, it's rare when a live record captures the emotion and energy of the actual show. Personally I feel the old saying "You were either there or you weren't" best fits here. It's not a bad record but I think the band would have made their fans a lot happier by recording new material. I really don't feel this record does anything to enhance the bands legacy. James Damion