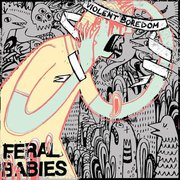 On their debut 7 inch Tampa Florida's Feral Babies deliver nine songs of fast, angry, aggressive
Hardcore Punk that's reminiscent of first generation Cali bands such as Jodie Fosters Army and the
Circle Jerks. Violent Boredom is a record that really took a few listens to properly digest.
The sound is raw, a bit sloppy and completely lacks in the production department. All short comings that, after a few listens, actually become part of the records charm. You might be a bit curious as to how the band managed to cram nine songs on to a 7 inch record. Well, most of the tracks clock in under a minute. The longest track doesn't even register a minute and a half. Which, unfortunately doesn't allow enough time to distinguish one song from the other. Though the record really fell short of resonating with me. I have to admit, however short lived, it had it's moments. James Damion

Though I would add my two cents to James review of the Feral Babies 7".

Feral Babies play an aggressive straight forward form of hardcore punk that took a few listens to grow on me. The positives are the sometime Ray of Today style lead vocals and strong backing vocals along with the loose rumbling bass lines. At times the Feral Babies remind me of "Christian Club" ( an obscure hardcore band from a few years back that few people have probably heard of , but I would suggest you check them out). As James stated the recording could be a bit brighter and tighter, but hey it's punk rock man...Dave G.