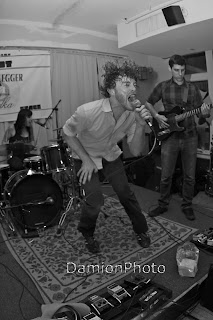 It is with sadness and the sense of loss that the band Ben Franklin has decided to, indeed, call it quits.  The band left us with two amazing records and countless shows that left us both inspired and exhausted. I was lucky enough to catch their last show at Brick City Riot Festival where the band flat out killed it. They left an indelible footprint on the New York/New Jersey music scene and will surely be missed.
The band left us with this statement.
James Damion


“…I’m sorry to say that [the band's performance at last weekend's Brick City Sound Riot festival] was our last show together, we’re disbanding, and our future appearances have been canceled. While it may be time for us to move on to new things, I’m quite proud of what we’ve accomplished so far and I’ll always remember the really fun times we had together. Thank you, Frenz Banklin, for being so supportive of us, you really are the best! It’s you guys who keep folks like us going…”