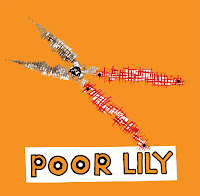 "Poor Lily is a punk band based in New York, formed in 2010. One of us lives in Cornwall and two of us live in the Bronx. We usually practice in Nyack. Our first album will be out in June 2011. It’s 13 songs done in 23-and-a-half minutes. The album will be available streaming and for free download on our site. You can get the CD from us at our shows."

"Guitarist and occasional singer, Max Capshaw, comes from a long line of classic New York bands including. Sick Of It All, Burn, Murphy’s Law, H20, Lament, Ashcan, and many more. Though he played drums for most of his career, he is more than able at the art of guitarring. The drum throne is occupied by another veteran, literally and figuratively, Dom Baiocco. He is the original drummer for the NYHC band Beyond. You may have seen him more recently at one of the Beyond reunions shows. Lead singer and bassist Adam Wisnieski comes from possibly the noisiest band in the universe (definitely at least the Bronx), Lightning Crabs."

“Poor Lily’s album is a reminder of how vibrant the noise coming out of the hardcore and punk scenes can occasionally be: innovative, inventive, interesting. There are moments of straightforward hardcore here, but they’re disrupted by an endless stream of ideas. It is for the best, really. It’s not shoegazing, it’s not pretentious, but it’s not straightforward or cliché. It’s just fucking loud and interesting. Thank fuck for that.” -www.punknews.org