The Everymen - Givin' Up On Free Jazz.

For the band's sophomore full length, "Givin' Up On Free Jazz". New Jersey's
The Everymen team up with Ernest Jenning's Records. The nine piece, multi instrumental band, originally formed in 2009 and has since established itself as one of the hardest working band in show business.

The album opens like a rocket launch with a forty-seven second instrumental "Bl'ast Off". Mere seconds that prove, once and for all, that in reality, the "V" in guitarist Michael V.'s name stands for Venom.
The band quickly changes gears on
"A Girl Named Lou". 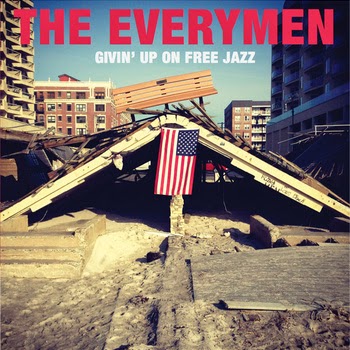 A song that puts a well deserved spotlight on Catherine Herrik's boundless vocal range.
The albums fifth entry and personal favorite, "AnotherThing to Lose", features a meaty bass line and overall vibe that immediately brings to mind Golden Earring's classic "Radar Love".
The Everymen invite Springsteen to the party with their cover of  "Ain't Good Enough for You." (No, Bruce does not physically contribute here.) The spirited homage is part E Street Band, part Asbury Jukes, all Jersey shore.
Overall, this is about as much fun as you can get without risking lengthy incarceration.
From the Metallic opener "Bl'ast Off" to the dark, deep and soulful closer "Izzy".
The Everymen put their uncanny ability to change up and switch gears effortlessly on display. The romp and the bomp we've come to love about the band is evident throughout and though the bands is as varied as it is retrospective. They seem to have created their very own genre here.
Each of the eleven songs featured on "Givin' Up On Free Jazz" cement The Everymen's reputation as one of the most loved bands out there. A pure celebration of drunken debauchery. One thankfully void the nagging hangover that often follows.
How can you possibly refuse? James Damion

Ernest Jennings Records  Get it Here