Six Bands, A Local College Campus and No Booze. What Could Possibly Go Right?

Ever since our favorite watering hole and go to place for music Maxwell's closed.
Shows in Hoboken have been few and far between. While DC's and Northern Soul offer a place for local musicians to play. They don't seem to come remotely close to what the aforementioned club provided week and week after week. So when I heard that an all ages show was taking place just around the corner from me. I was more than happy to take a walk up that hill to the scenic grounds of Stevens Institute of Technology. Though I had heard about shows taking place there in the past. I never had the chance to attend.
My first impressions of 1 Castle Hill Rd. were very good ones. A large, open room with lofty ceilings and plenty of room for the bands, merch tables and lounging. The music of
Sunny Day Real Estate, Jawbox and other favorites washed over the speakers before the show started and everyone in the vicinity of the building seemed open and friendly.
$10 dollars at the door and an X on my hand and I was ready for anything. Here's how the night progressed. James Damion 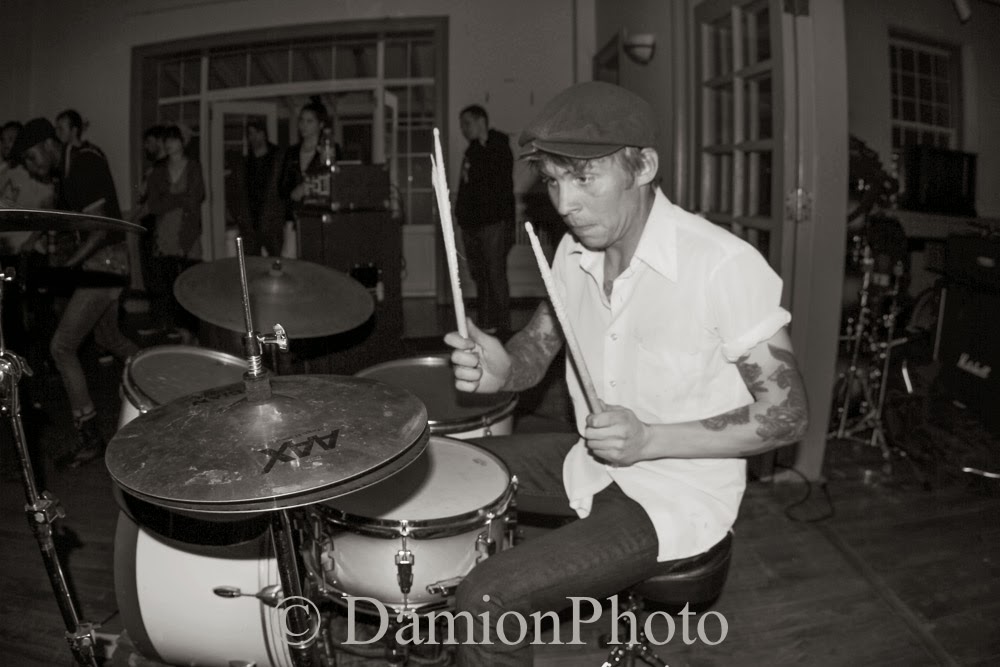 Loose Ends opened the night and impressed
everyone in attendance. With the size of the room being as large as it was. It was good to see so many people within spitting distance of the band. This was my first taste of this New Jersey Hardcore band. They've got a seven song EP available on Bandcamp available.
Aside from that, I couldn't find much info. 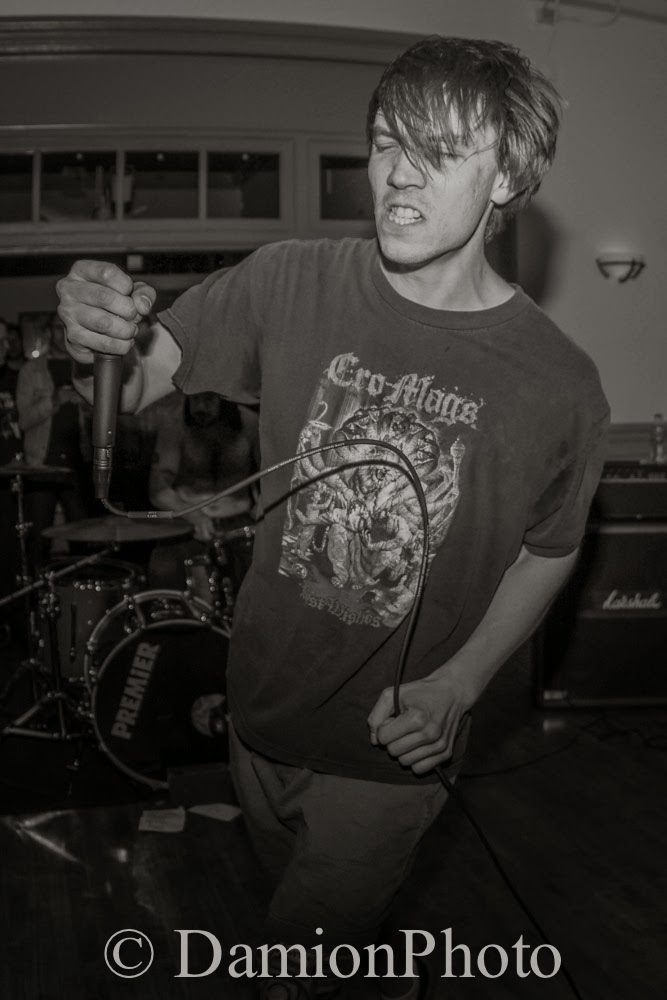 Just prior to the shows late start I bumped into the singer for Brain Slug. At the time, he seemed to be one of the only people in the room old enough to speak to without getting the cuffs put to me. The bands name quickly reminded me of that old smuckers jelly commercial. "With a name like Brain Slug, they have to be good." If that wasn't the understatement of the week, I got nothin' for ya son. Talk about taking things to a new level. As I stood there, I couldn't help but think it might be too early in the show for a band to be this good. The truth is they were. These Noo Yawkers raised the bar pretty high. They even greased it up a bit for anyone that followed. Intense stuff.
I downloaded their two song EP from Bandcamp this morning. It more than put the fire in this old mans belly. I really can't wait to hear more from this band. It's good to know they're close enough to keep tabs on. 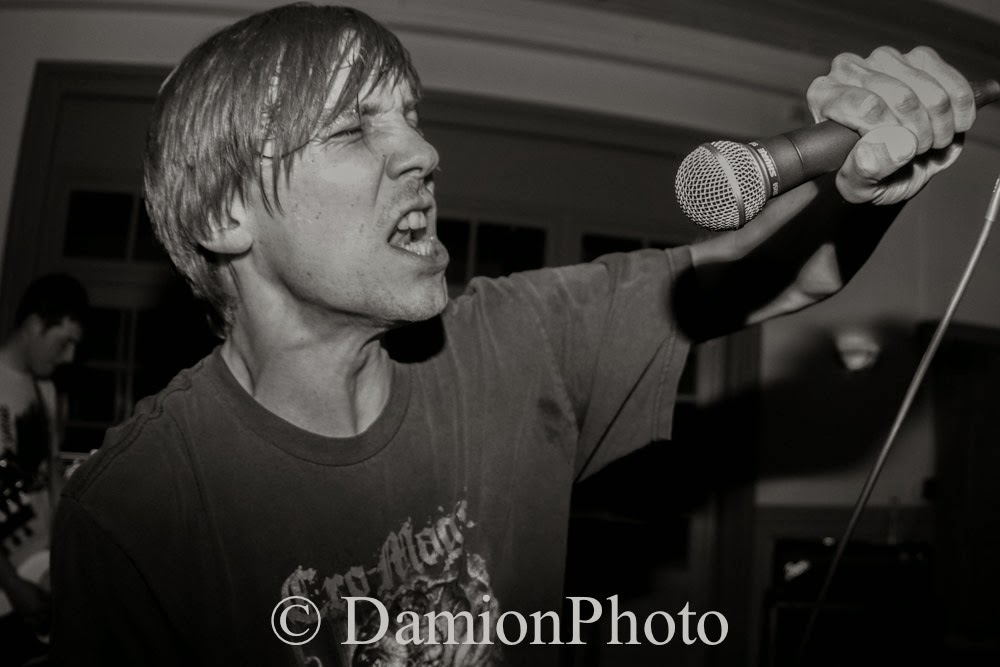 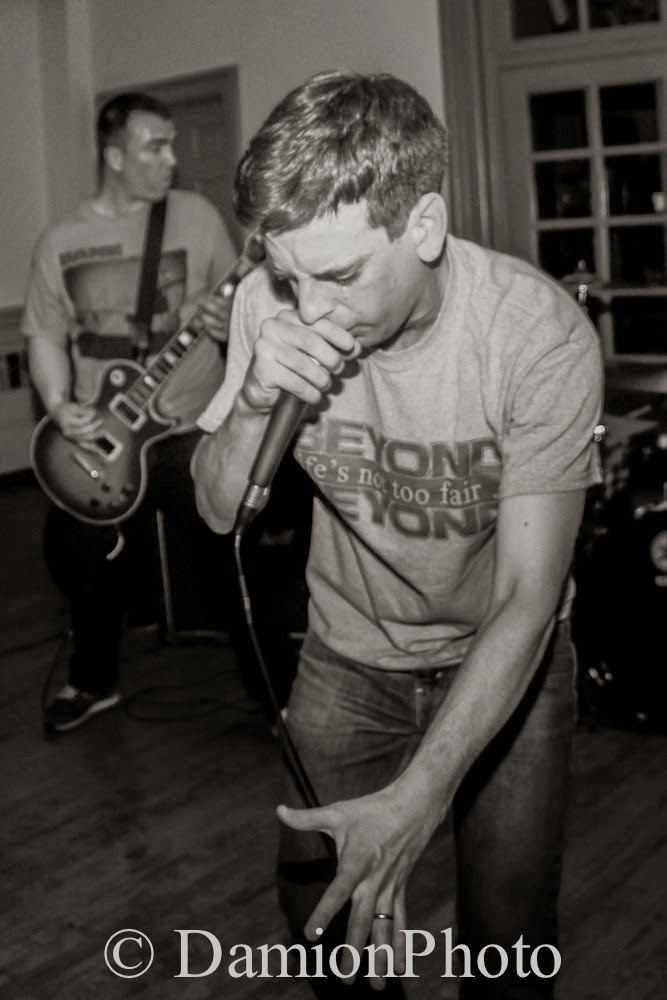 Living Laser, one of the two bands I had any prior knowledge to followed. I first learned about the band from co-blogger Dave G. and his positive reviews. Needless to say, they were one of the key reasons I decided to show up that might. From the first chord to the last note, the band, led by lead singer who can best be described as a human catapult. Forget the trampoline. Jay is his own rocket launcher. The band quickly exceeded my already lofty expectations while leaving me physically exhausted. If Living Laser ever decide to change their name.
I think "Lightning in a "Bottle would be a good choice. In recent years, my experience with Hardcore shows has almost exclusively involved the forty plus crowd. Getting the chance to see a current band as good as these guys convinces me that there's more to the genre than nostalgia and reunions.
Living Laser Facebook 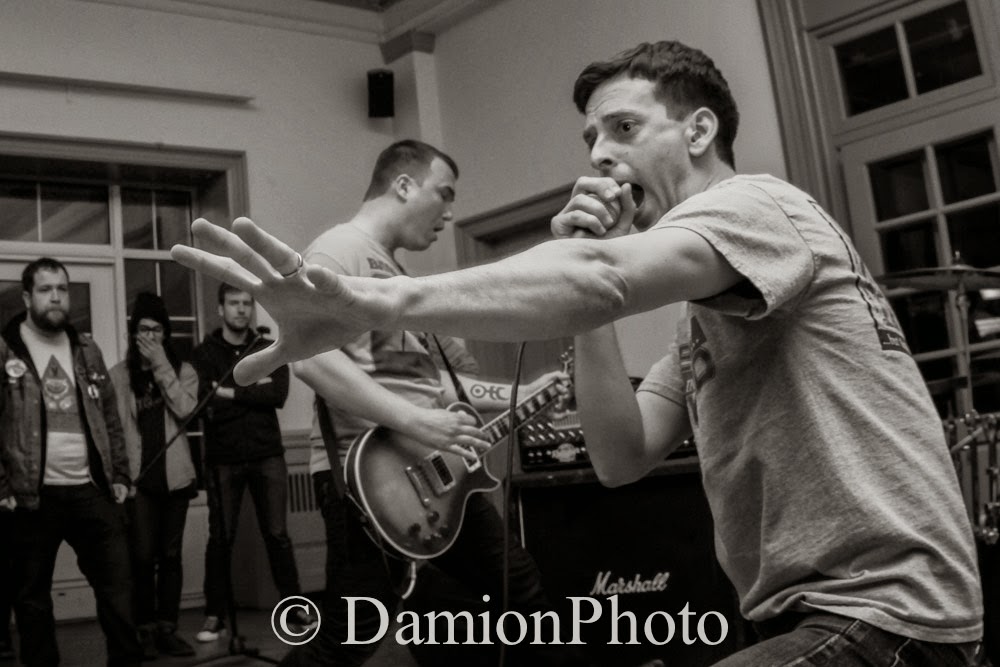 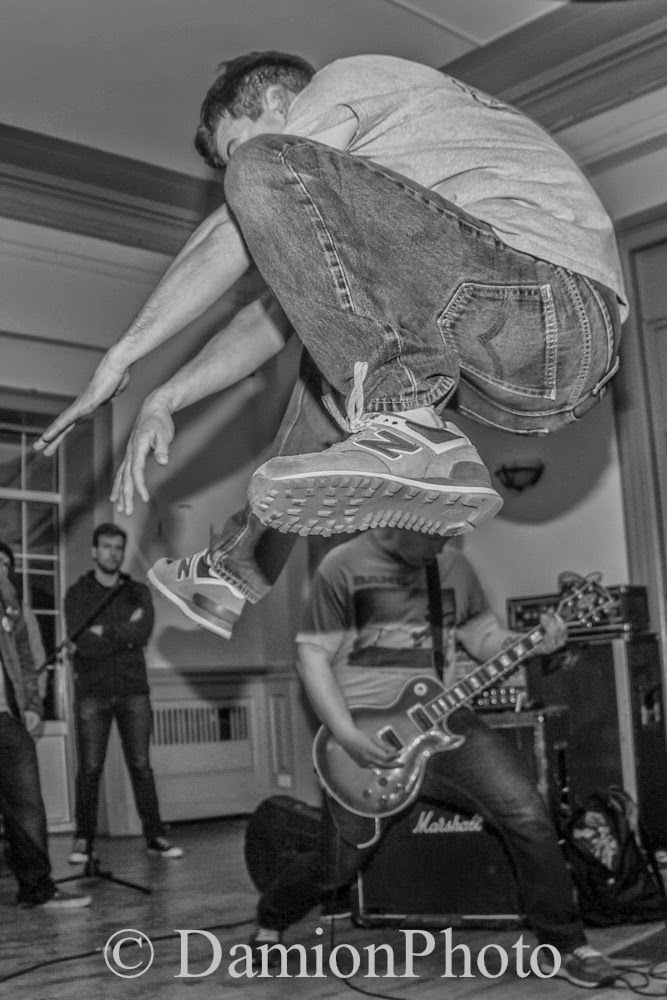 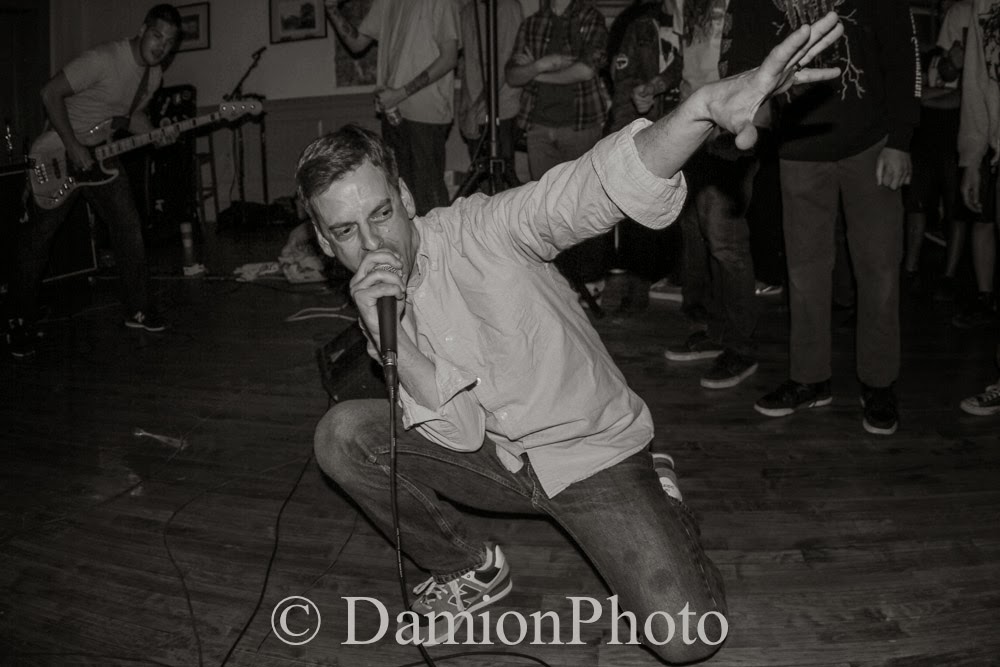 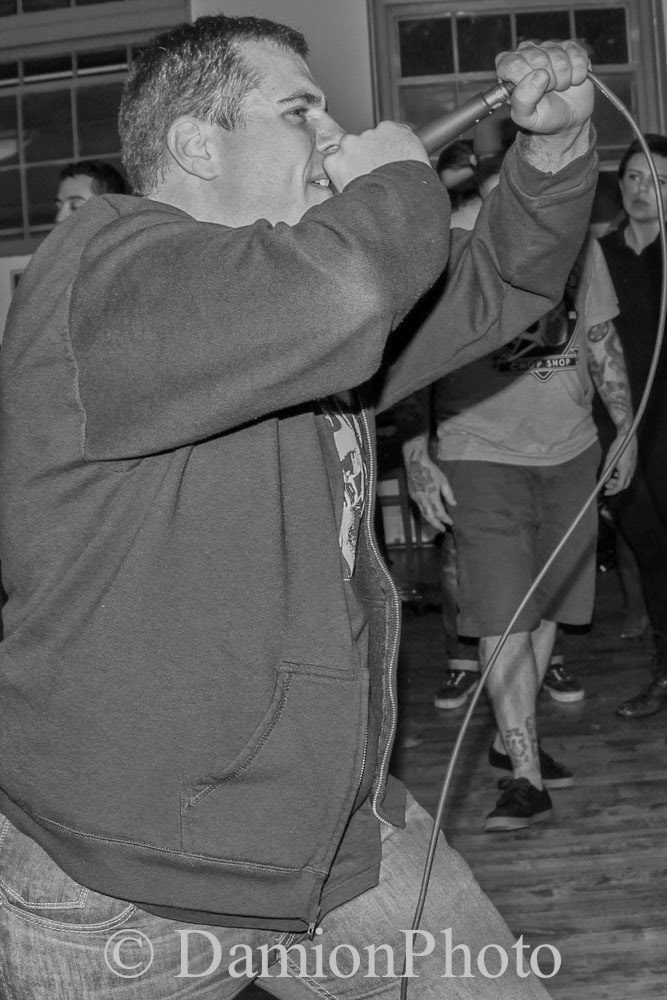 Altered Boys, another band I grew fond of through a couple of EP's I pulled from the Grave Mistake Records catalog. One of the intriguing element of Grave Mistake and Sorry State records is that so many of their releases and bands carry somewhat of a mysterious anonymity about them. It's always an added bonus when you can put a face on a band you like by seeing them live. The band delivers a wide array of noise and debauchery. From straight Hardcore to more dark dissonant sounds. The bands sound covers a lot of ground. Lead singer Geoff made the most of the rooms space while engaging the crowd and welcoming the crowd to sing along. Getting to see them live for the first time gave me a sense of closure while opening the doors for future opportunities to catch them live. 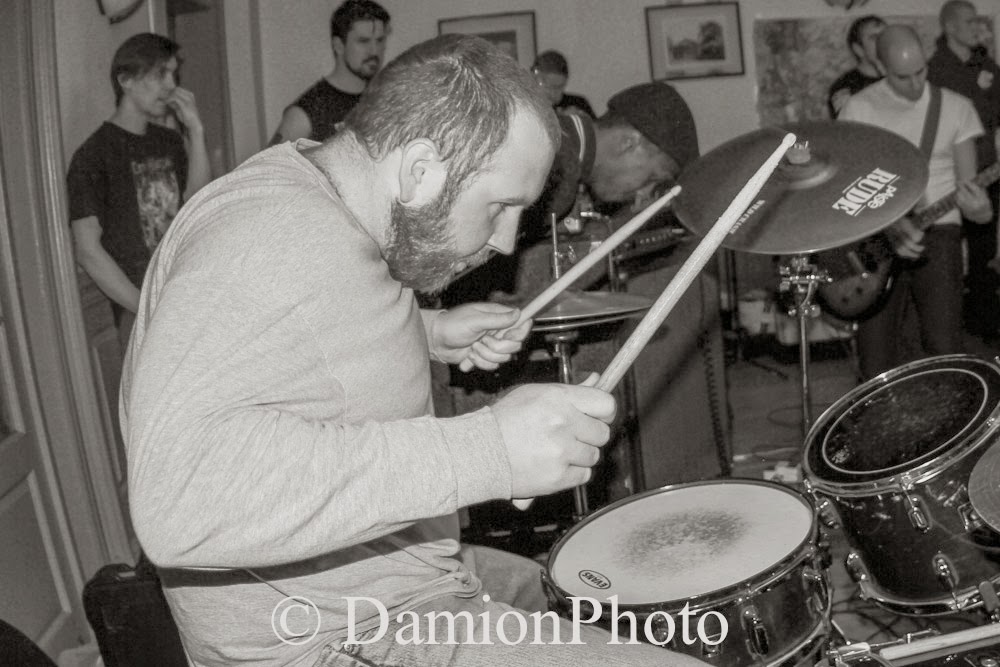 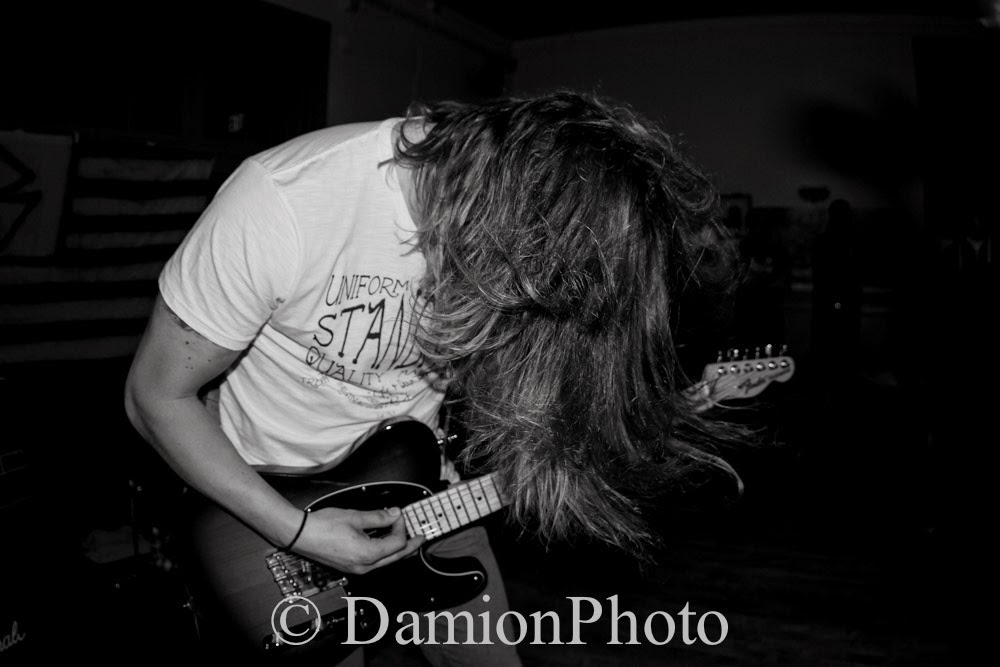 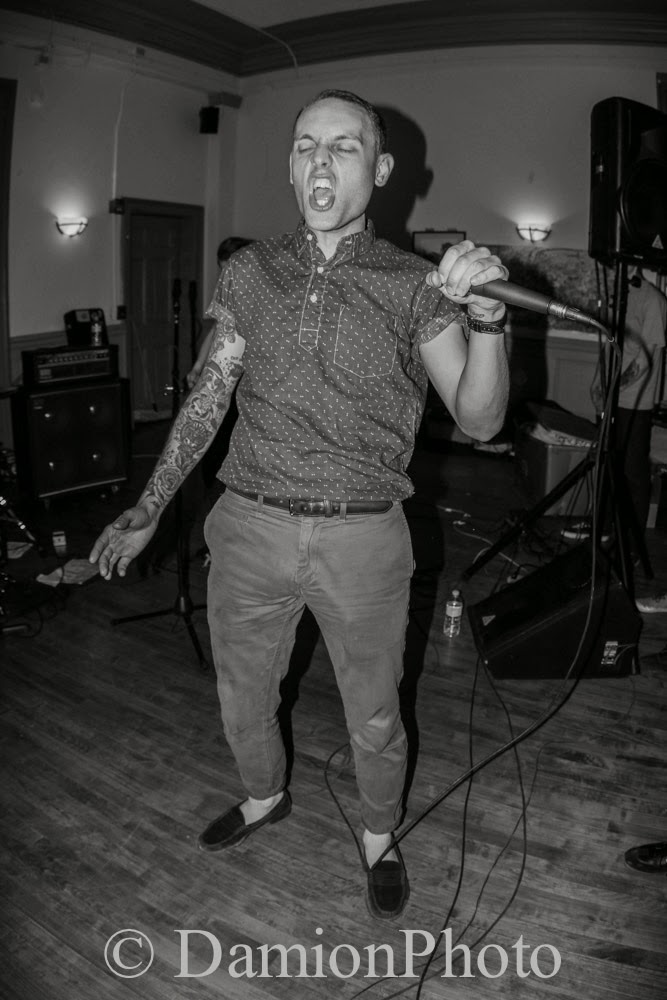 As Altered Boys finished their set. I thought of heading home. Tired, hungry and a bit battered. My tank was low. Luckily, a trip to the bathroom for some fresh air was enough fuel to get the engine restarted. Within minutes, it was time for Lovechild to do their thing. Just prior to their set I caught a glimpse of the band and thought to myself. "These guys are quite fashionable." "Could they possibly be that good a band." Thankfully, this Boston area band sound even better than they look. Insanely good Hardcore Punk with an energy and emotive feel that won me over instantly. Throughout their set I found myself hoping they had a ton of EP's at the merch table and were already planning a geographical move to my area code. An inspiring band in every sense of the word. They served as a reward for "Best decision to stick around." 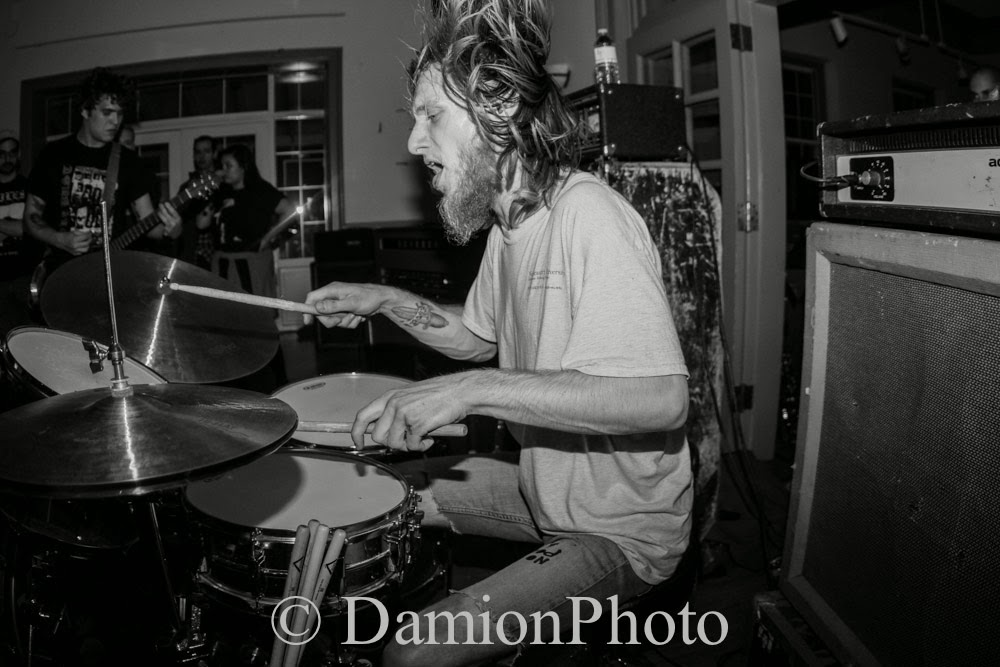 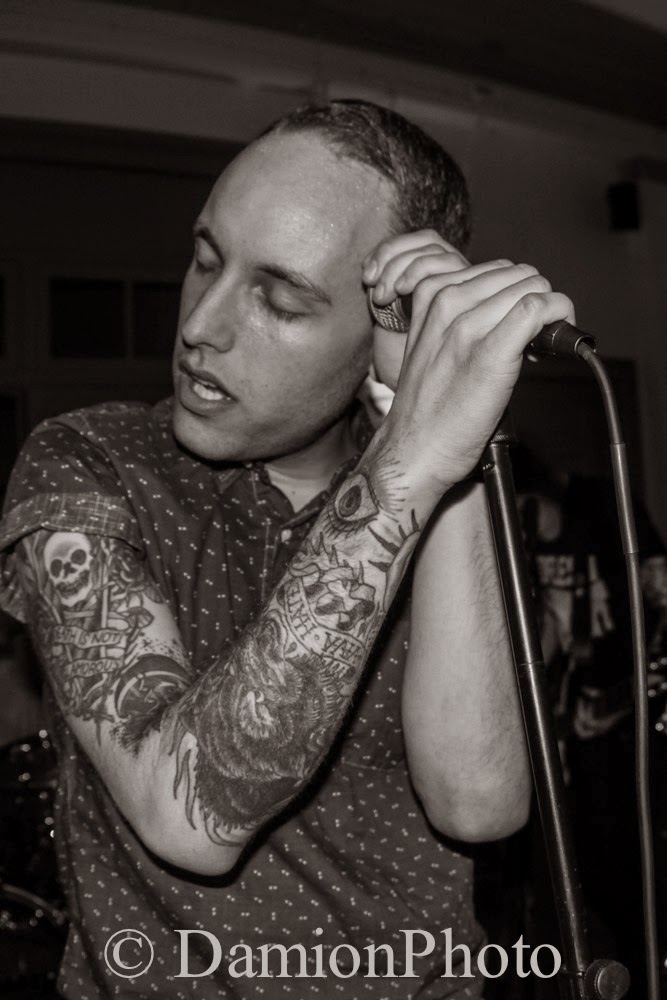 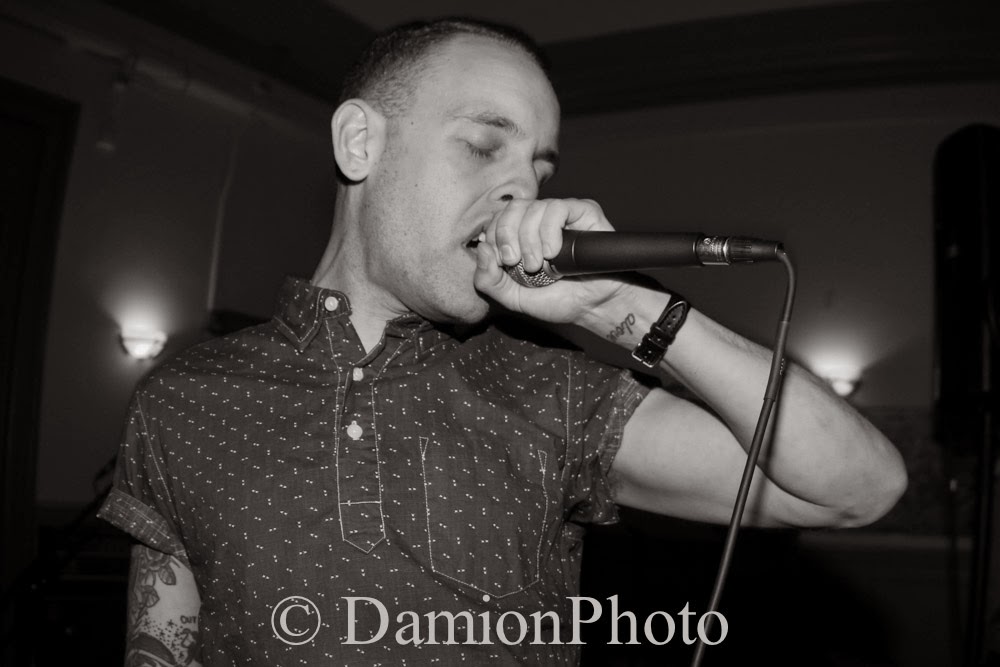 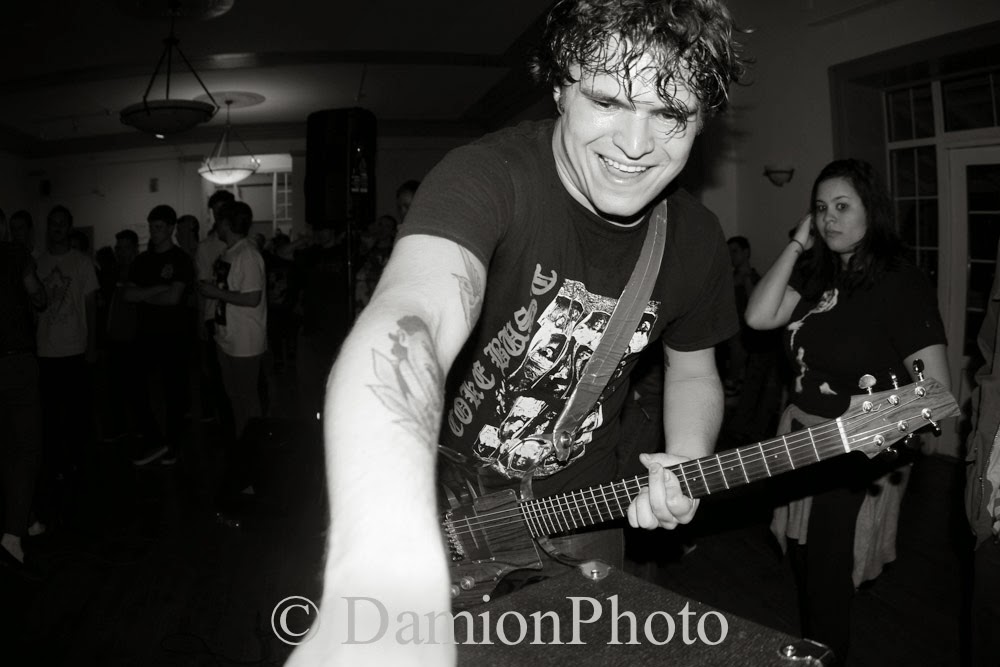 Closing out the night were Code Orange Kids. It had been one of those perfect nights where the energy and momentum grew with each set. an all inclusive event where the crowd ignored the common practices of creating a self imposed force field between themselves and the band. Pennsylvania's Code Orange Kids made their trip north an unforgettable one. The band delivers a raw Hardcore sound that can easily be compared to Black Flag's earliest days. An added metal infusion that immediately had me thinking of one of my favorite bands Kylesa. The band didn't close the show as much as they shut it down. Considering what an amazing night it already was. Code Orange Kids set was one of epic proportions. One that will most likely stay with me for years to come. Thanks to all the people and bands for convincing  me  I'm definitely not too fucking old for this shit.
Until next time. James Damion 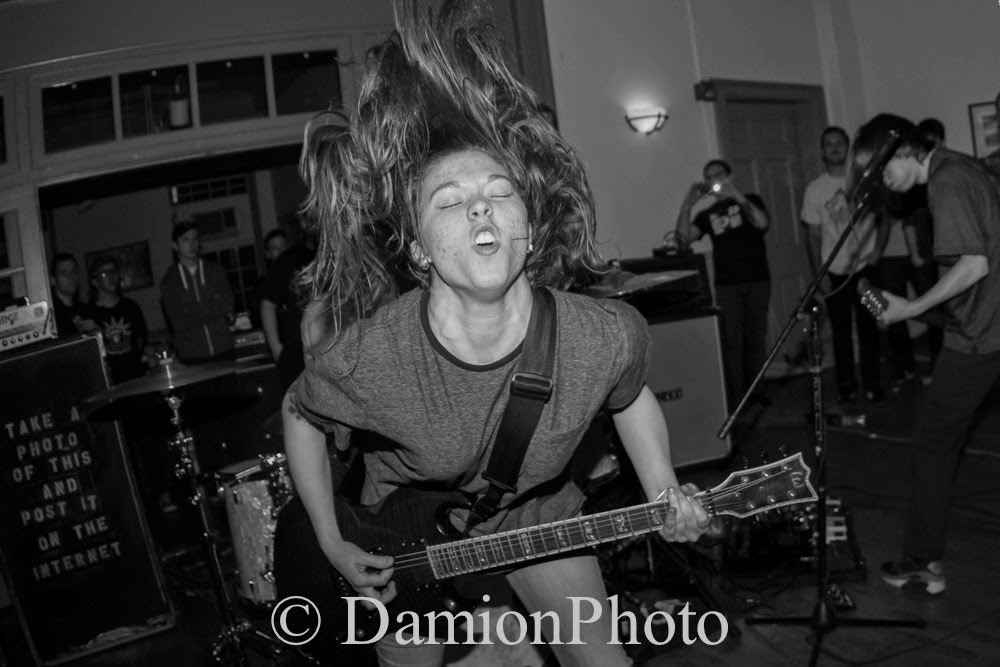 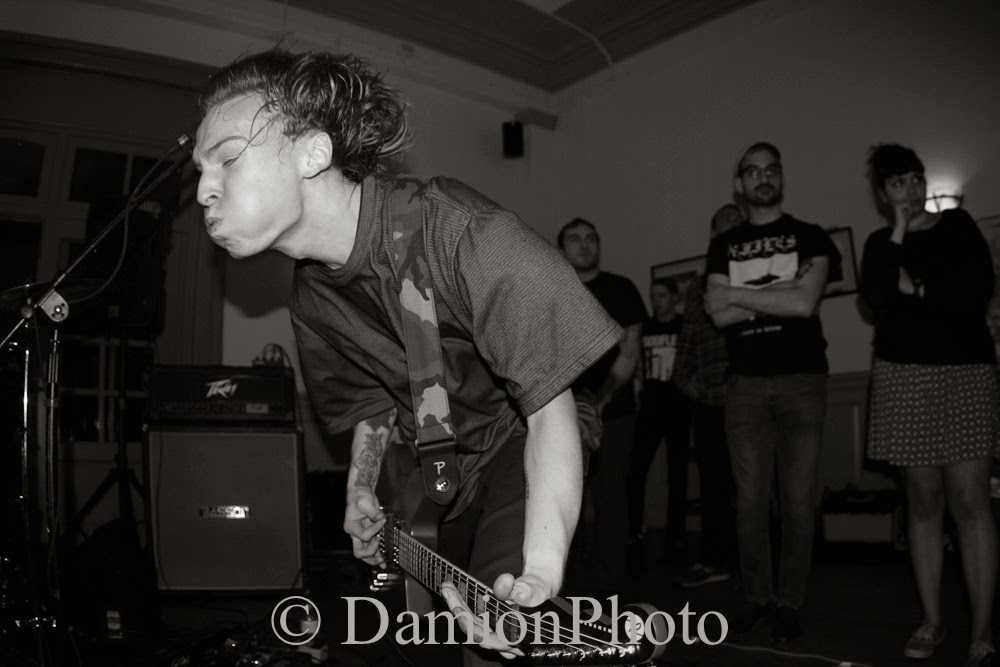 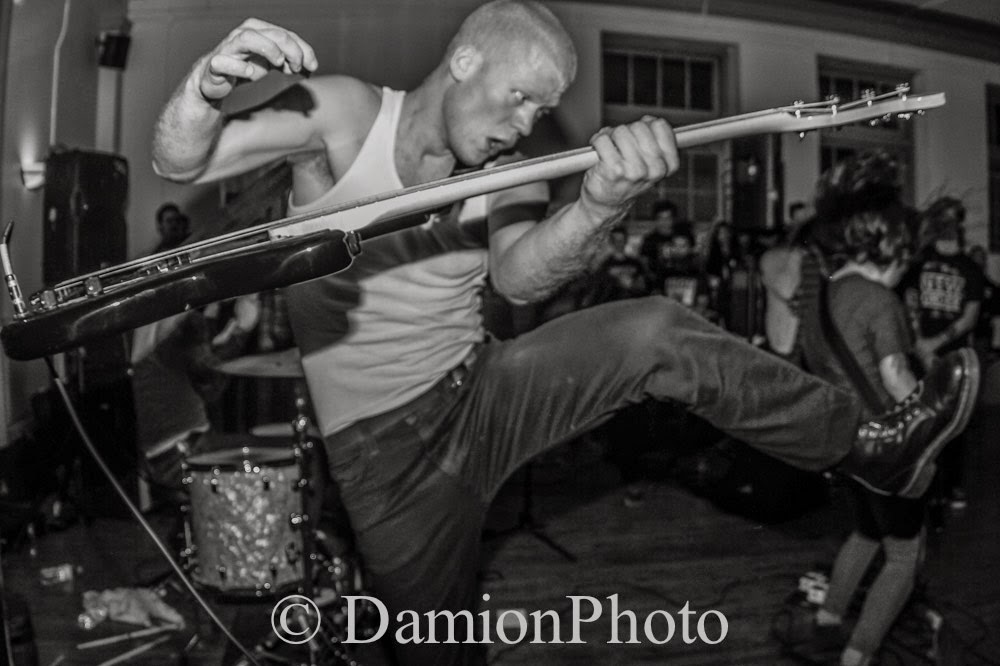 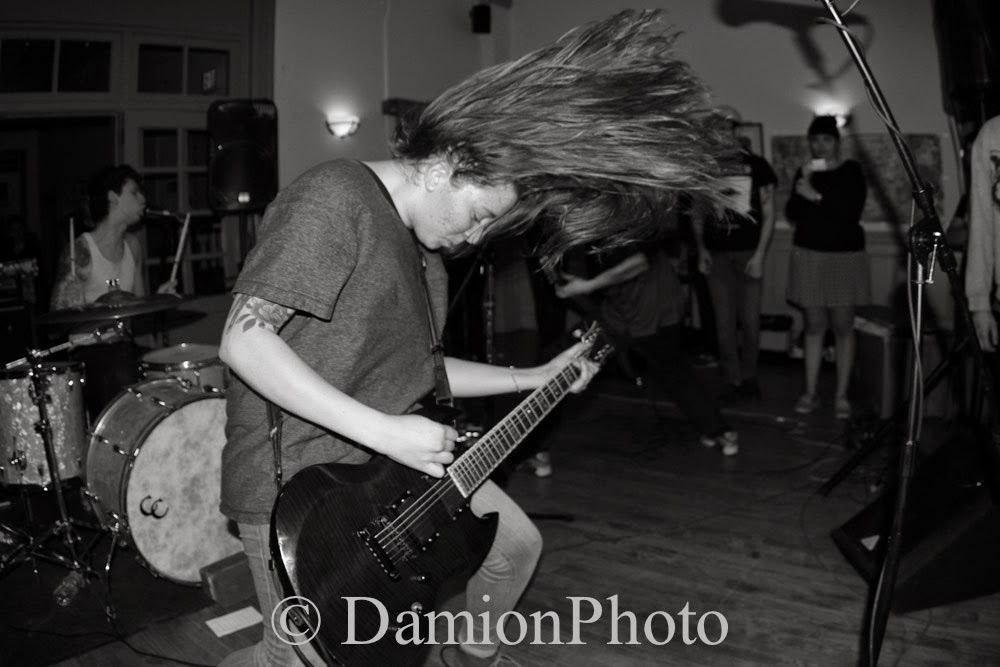