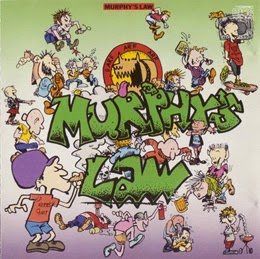 Founded in Astoria, Queens, NY in 1983, Murphy's Law was at the forefront of the burgeoning NYHC scene of the 1980s but infused an element of humor and
light-heartedness. This debut album was originally released in 1986 but has been out of print for decades until now. CD includes one additional track.
Vinyl version includes full digital download of album and one additional track.

In listening to the bands 1986 debut album, I was returned to my early days on the Hardcore scene and how important a band Murphy's Law was to everyone involved in the music. Walking into West 3rd's Bleeker Bob's and putting my name on a list to secure a copy prior to the records arrival. The band and songs 'Beer", 'Crucial BBQ',
'Sit Home and Rot' and 'Care Bear' became integral parts of my vocabulary. Along with Agnostic Front and Token Entry, Murphy's Law drew me into the N.Y.H.C. community before I could even talk my way in to the doors of CBGB's. Listening to these songs, some for the first time in years, brought back some great memories while firmly planting a lasting smile on my face.

Along with the bands Debut record (featured here) I Scream Records will be reissuing Murphy's Law's entire back catalog, including 1989's 'Back with a Bong',
1991's 'The Best of Times', 1996's Dedicated' and 2001's 'The Party's Over'.
The reissues will feature new artwork and bonus tracks, and will release the albums digitally for the first time ever, as well as on CD and vinyl. The label will also be releasing a new studio album from the band later this year. Kind of cool if you ask me. Until then.
James Damion

I Scream Records  Get it Here
Posted by James Damion at 4:18 PM