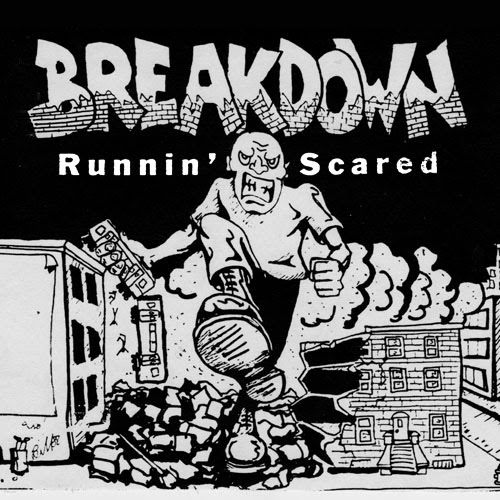 Breakdown's 1987 demo served as a benchmark for what was to shape New York Hardcore for years to come. As many consider 1985 / 1986 as years that shaped the second wave of NYHC. Their demo along with Raw Deal's entrance into the fray, set the bar higher than most bands could ever dream reaching. Just as
Youth of Today and select acts from the Revelation camp created an army of cookie cutter straightedge, posi-core bands. Intended or not, Breakdown opened the gates for just about every tough guy Hardcore act to follow.

Considering the impact and and downright icon status of that 87' demo. I didn't come close to breaking a sweat when it came to acquiring 'Runnin Scared', but once a the needle hit the record. I was transformed. In listening to "Dissed and Dismissed' and 'All I Ask" I came to realize that, as much as I love, support and respect Hardcore music and the community it's created. Bands have very seldom come remotely close to what Breakdown created.


'Runnin Scared' features the 1988 demo of the same name. Recorded in The Loft studios in Bronxville, near the parkway, and previously unreleased versions of 'All I Ask' and
'Hold Me Back'. The latter basically a new Breakdown song that you can’t get anywhere else but here. Also included is their second WNYU session from 1989. The record contains eighteen tracks in all and includes a 12" X 24" with rare photos and flyers as well as new liner notes by Jeff Perlin himself. First pressing of 1,000 black vinyl. Go get yourself a copy before they're gone. James Damion

Get it Here  Painkiller Records