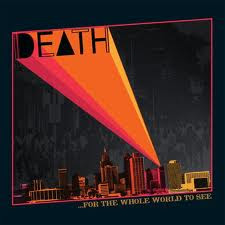 Detroit's Death are one of the most intriguing music stories to emerge in years. Formed in the 1971 by brothers Bobby, David and Dannis Hackney. In 1974 the band, with the financial backing of Colombia Records Clive Davis, went into the studio to record their first album. When the brothers refused Davis' urgings to change the bands name to something more commercially viable. Financial and label support ceased. The band released a short run of 500 copies the following year. By 1977 the brothers called it quits. By all reasonable means, that should have been the end of the story. Thankfully for everyone involved, a recent documentary and official release on Jack White's Third Man Records is giving the band Death their proper due and respect.

...For The World to See features the original seven tracks from that fateful 1974 recording. Seven songs of minimalist, bare bones hard rock that clock in at around
twenty six minutes. A sound that, years later, would serve as building blocks to what would become Punk and eventually American Hardcore. One can't help but draw comparisons to the Bad Brains. Those comparisons tend to get trippy when the listener is reminded that Death and '...For the World to See' predate the highly influential band by years.
Songs that portray rage, frustration and alienation with a raw urban vibe that paints a perfectly bleak picture of early 70's Detroit. Think the Stooges meet the Bad Brains in soul soaked time warp. 'Rock-N-Roll Victim' and 'Where Do We Go from Here?' are two of the albums stronger tracks while 'Politicians in my Eyes' is just mind blowing and as socially relevant today as it was in those tumultuous times.

This recording serves as a reminder of just how timeless music and the raw emotions that inspire it can be. '...For the World to See' feels just as relevant and urgent today as it was when it was recorded decades ago.

DEATH
Posted by James Damion at 9:20 AM