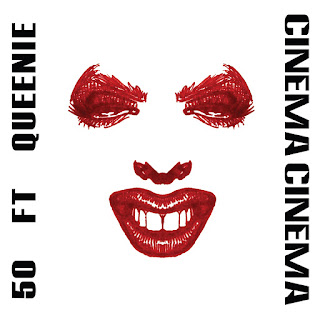 In the oddest of couplings since President Obama and Governor Chris Christie walked hand and hand along the Jersey Shore. Brooklyn's experimental noise duo Cinema Cinema team up with New Jersey's micro-indie label Dromedary Records.
As the label gets ready to celebrate its twentieth anniversary it will be releasing an album featuring covers of songs released in 1993.
The fateful year Dromedary was launched.

'50 Ft. Queenie', a cover of the opening track to PJ Harvey's album 'Rid of Me' features the mind twisting reverb, savage guitar riffs, schizophrenic vocals and tribal drumming that we've come to expect from this Brooklyn duo. Yet somehow these kissing cousins managed to take things to a level of intensity that somehow manages to go beyond the scope of it's music. Since first being introduced to this very special band in mid 2011. I've noticed myself move from a position of observance to somewhat of spiritual inclusiveness. Where I once surrendered to the trip.
I feel as if I am now part of it. Just as Cinema Cinema's cover of '50 Ft Queenie' manages to take the song to new and barbarous heights. It also gave this listener a new level of appreciation and interest in PJ Harvey's classic.

The records B side 'Adult Themes' is surprisingly more melodic and atmospheric. The band really take it down on a notch on this song which features a spiraling guitar sound and a jazzier more rhythmic approach to the drums, it's a both interesting and welcome side of the band  that I've seldom seen before. The upcoming   'Covers' album will feature more than a dozen artists covering various songs from 1993. The double LP is to be patterned after the great 1994 compilation "Why Do You Think They Call It Pop?" from Pop Narcotic records. Look for it in the fall. James Damion

Dromedary Records  Get it Here