It was one of those last minute decisions to jump in the car and head up to Montclair to fill my ears with some good tunes. The shows Facebook page listed "Doors at 8:00 show at 9:00" but as I arrived at around 9:40 there was no sign of life in the cavernous lair known as the Meatlocker. Frustrated and nearly knocked unconscious by a toxic smell that I can't begin to describe, I headed out for some air. A trip to the liquor store and Dunkin' Donuts killed some time and by 10:30 the smell of death had dissipated and the possibility of some live music began to take form. 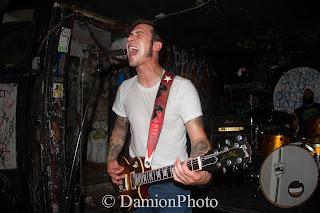 Brooklyn's Dead Serious followed and really brought a Hardcore vibe to the room. Though I am completely new to the band, I hold many fond memories of catching singer Ryan Blands old band Home 33 in the 90's at venues such as the Pyramid and Coney Island high during the mid to late 90's. Watching him perform with Dead Serious really brought me back to those times and reminded me of a particular set where Ryan was hanging from the ceiling pipes of the Pyramid while belting out tracks that would become staples on the album 'Jody's Courtier'. All comparisons aside, Dead Serious are an entirely different band with a lot to offer with their straight forward style and the energy in which it's delivered. The band has opened for Converge and will soon be performing with Citizen's Arrest. Not bad if you ask me. Dead Serious Facebook 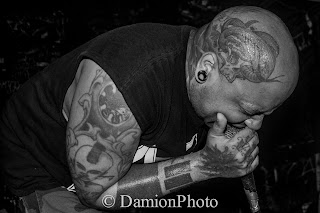 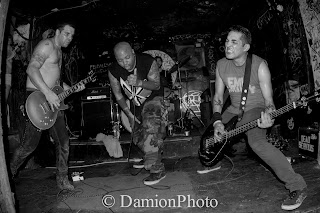 Next up were Detroit Rock Cities Collapse. After hearing the bands "Disarm" Ep I was excited to catch  an act that had managed to capture both my interest and curiosity after just a couple of listens. When I first heard the name 'Collapse' I mistakenly thought it was a reunion or reconfiguration of the short lived NYHC band I had seen at CBGB's and the Pyramid club in the  late 80's. With all the reunions of bands, even the more obscure ones, who could blame me.After briefly meeting the band at their merch table prior to the show I was quickly put back on track and placed firmly in the present.  From the very first note I felt perfectly in tune with the bands rhythm section was so powerful. it felt as if a sinister army of tanks were descending with a vengeance on Montclair's suburban streets. Accented with powerful vocals and stinging lead guitar, the Collapse quickly grabbed the attention of the crowd and personally had me wishing they were indigenous to these parts. Despite having downloaded 'Disarm' and speaking to them before the show, I found myself wanting to dig deeper. Just hoping they'll stop by on the way back home from their tour.
Collapse  Bandcamp 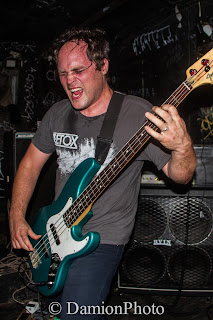 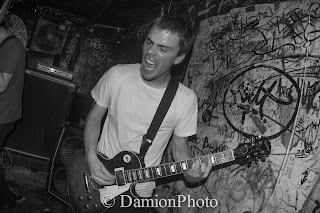 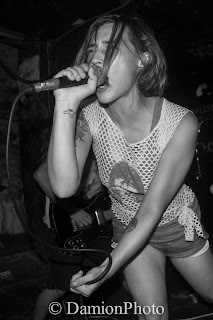 By the time Collapse closed their set I was physically exhausted and started to make my way back to my car for the trip home. Thanks to some much needed fresh air and a few words of encouragement by Pour the Pirate Sherry's Paul Beir, I decided to take a deep breath and head back downstairs. By then New Jersey locals Ide's had just launched into a manic set. I inched my way towards the action slowly as if approaching a rabid stray and before I knew it I found a spot where I could be close enough to get bit and gettin' bit is what I got. Ide's, another female fronted Hardcore band combine a ton of energy and emotion with some serious musicianship and a vibe that gives you the feeling off the vibe of "Your either with us or you're against us." Safe to say, I was definitely not the latter. Ide's Facebook 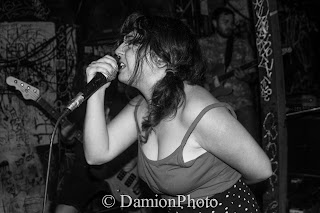 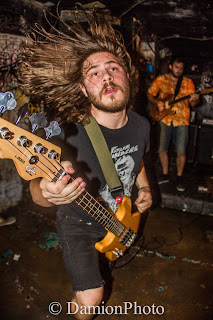 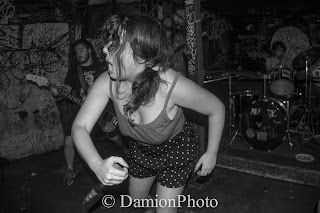 Overall, this was an excellent mix of bands and people. Proving once again that it's not so much about the real estate as it is about the people who occupy it. Until the next time... James Damion
Posted by James Damion at 11:48 PM