The Mistaken - Between Memory and Habit LP 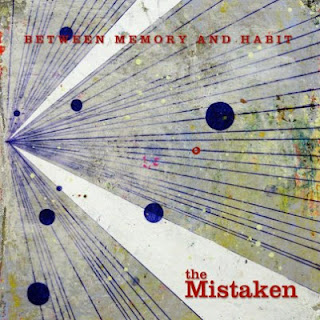 The Mistaken features
Andy Guida and Matt Warnke who team up for the first time since working together on Running Like Thieves 2003 release "Same Time Next Year..."

On "Between Memory and Habit" The Mistaken live up to their namesake as they throw us a musical curve switching gears and sounding unlike any of their past musical endeavors.

This is not Hardcore.
Instead, these ten songs offer a nice blend of Bluesy-Rock and surprising, dare I say,  Country leanings. A lot can be said for musicians, known for creating music within a certain, set genre, step out of the box to create something different. It doesn't always work and is often
illl received. But when it comes off sounding this good and honest. How can one not embrace it with open arms? Matt's Bluesy baritone vocals have him sounding like he spent some time on chain gang channeling the likes of Johnny Cash and Mike Ness. Andy Guida does an excellent job sharing guitar duties, playing bass, piano and drums. All while handling  production duties at his Six III Studios. He really lives up to his reputation as a go to engineer and musician time in and time out.

Though currently a two piece, The Mistaken are looking to take things out of the studio and on to the stage in 2013. They've enlisted Gavin Van Vlack and Dan Cav of Absolution to handle Bass and Guitar duties. So stay tuned. James Damion