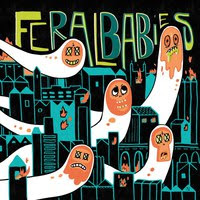 Tampa Florida's Feral Babies team up with Orlando's Chemical Ache to create one hell of a split. Allowing me to enjoy a band I love, all while discovering another.

The Feral Babies side features five songs of muscular Hardcore that are fast, aggressive, angry and above all, musically tight. The band draws you in immediately on the opener "Next Week".
The track is an avalanche of sound with it's bass, drums and blazing guitar excellence. You're already swept up in it's powerful grip by the time
Justin Arnold's vocal attack begins mere seconds later. The next four songs are just as impressive and addictive.
Sulynn Hago's guitar prowess cannot go without mention or praise. Her style and delivery make he one of the best in the game. Having followed the band since their demo days and seeing them live at Brooklyn's Stolen Sleeves Collective in 2012. They've become a favorite of the blog. I sincerely hope they find themselves in our neck of the woods this year.

Chemical Ache's side of the coin offers a different style but sounds just as good in comparison. The band delivers three songs of fast, laser sharp punk with a bratty vocals. "Medicated Kids" comes off sounding like an O.C. Punk classic. The sound is tight and smart with a really great energy.  Each of these three songs had me craving for more.

A stellar release by Kiss of Death records, the Feral Babies and Chemical Ache.
James Damion