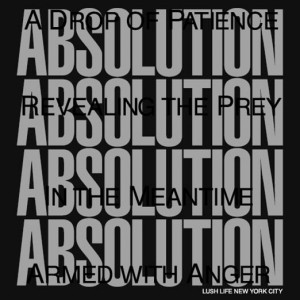 Ever wish you could go back in time and hit the "Do-Over" button? Right the wrongs of the past and tidy shit up a bit? Well, that's exactly what the band Absolution did here. Originally released in 1989 by Combined Effort records.
The self titled four song EP was well received by the Hardcore/Punk community and deservingly praised as somewhat of a much needed breath of fresh air to a style of music that had grown stale due to mediocrity, caused largely by an influx of cookie cutter, paint by number Hardcore bands.
Fast forward twenty something years and a few reunion shows later. The band, which features original members Djinji Brown and Gavin Van Vlack joined by Hardcore veterans Dan Cav and Andy Guida, decided to right some wrongs by going back into the studio and tightening the screws a bit.

Upon hearing the band was going into the studio to record, I was sent into an anticipatory orbit. When Andy Guida, the bands drummer, engineer and producer informed me they were re-recording old material... Well, my anticipation quickly came crashing back to earth. Regardless of the results the improved recording and production might achieve. I couldn't help but scratch my head, wondering "What if that time in the studio produced new Absolution songs?" It felt like a cop out.

Fortunately for me, I decided to put aside any and all preconceived notions and listen with both an open mind and open ears. As the needle hit the records and "A Drop of Patience" kicked in. I was presented with a moment of precise clarity. It had been years since I last played the original EP. Yet, I could instantly hear the difference in the quality and overall power of the newer recording.

The marriage of Guida's colossul drumming and Van Vlack's signature guitar style create a sinister and unforgiving sound. Not to mention the addition of Dan Cav on bass. However, it's not until singer Djinji Brown enters the fray that I have to wonder aloud "I remember liking this band a lot." "How is it possible I didn't love this band?" While Brown's style will easily draw comparisons to a younger, healthier H.R. (Bad Brains). It also allows us a glimpse into, what was then, the not so distant future and Chaka Malik (Burn, Orange 9 mm). To close,
I'll say this,"Though I may have come to this record feeling a bit cheated."
"I left with a nice reward." The future of this band is yet to be determined. One can only hope that we'll see some new music from Absolution in 2013.  James Damion