Bad Brains - Into the Future 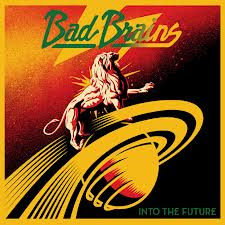 It's never a good thing when you have a negative attitude about a record before even listening to it. Thus was the case with the Bad Brains latest release. Sad yet appropriate considering how much the band meant to me and basically everyone that listened to Punk or Hardcore in the 80's. The ROIR cassette and 'Rock for Light' were part of my introduction to Hardcore. I saw the Bad Brains many times between the release of
"I Against I" and "Quickness". Including leaving my senior prom early with my date to catch them at the Ritz in NYC.

My love, respect and admiration for this band never really died but remained firmly placed in that 80's decade. When 2007s "Build A Nation", (the bands first album of new material in twelve years) arrived I harnessed that love and respect to have hope that the band would somehow gather the solid musicianship of Daryl Jennifer, Dr. Know and Earl Hudson, matched with  the production on long time fan, friend and supporter Adam Yauch to help overcome the fragilities of H.R.'s worn vocals and well documented mental state. Disappointment followed, as did my hopes the Brains would ever recapture old glory or even come remotely close to what they accomplished decades ago. Sadly this was not the case with "Build A Nation". Even sadder, it is not the case with "Into the Future". The band really does try to.

As far as I can see the problem with being the Bad Brains is living up to the incredibly large reputation the band is do deserving of. The problem I have with "Into the Future" is though the band is working hard on creating an album that will bring us back to that golden age, all while providing hope for the future. It comes off more like the Bad Brains have become a Bad Brains cover act. Sure, they can play the songs while looking the look; But they never come close to sounding or feeling like the original. Dooming themselves to playing weddings, high school reunions and frat bars. If "Into the Future" holds any clues to where we're headed. Book me on the first flight out of here. One can only dry hump the past for so long without becoming dehydrated and uninspired by glories long past. I will not be brainwashed into thinking this band will ever produce anything close to what they did in the 80's.
James Damion