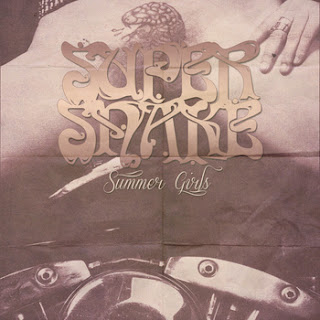 As I sit here with tingling extremities in an apartment within view of Japan's
Mount Fuji waiting to add layers before heading out. I thought it would be the perfect time to add my two cents about an EP that's been on replay since I got off the plane two weeks ago.

It's hard to imagine it's taken me so long to review a four song EP I downloaded on Bandcamp over a month ago. It's just that these four songs are excellent on so many levels that it's taken it's fair share of time to fully delve into their unique eccentricities.

Super Snakes is a "Super Group" of sorts. Comprising Jerry Jones of Trophy Scars and former personnel from Chambers and I am Heresy respectively. Three uniquely special bands in their own way; Jerry Jones being the most notable.

On the bands debut they pull out all the stops and take things to a level usually selected by seasoned veterans and bands we hold in the highest regard.
Dirty, "Don't Give A Fuck" relentless Rock excess. Jerry Jones delivery is part screamish, part menacing, demonic slithered word. Each of the four track names come from some real badass characters both real and fictitious. "Baron Samedi" was a Loa of Haitian Voodoo. "Frank Booth" the fictional character and antagonist from the 1986 classic "Blue Velvet" "Anton Chigurh" was the hit man from the novel "No Country for Old Men" and "Stringer Bell" the drug kingpin from the TV dram  "The Wire". Lyrically these tracks are even more sinister and creepy. "Frank Booth" was so dirty I felt like I needed to be bathed upon listening. John Pinho's guitar work on "Summer Girls" is not only notable but praise worthy to say the very least.  Whether or not you're a fan of any of the aforementioned bands. This is an EP and a band you should be looking into. Super Snake has it's first full length already recorded and due out soon. Go make yourself familiar with these four songs before it arrives. James Damion