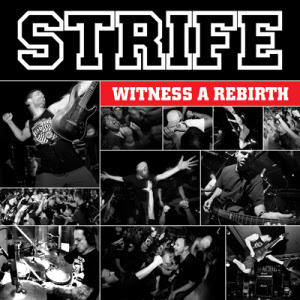 Hardcore torch bearers Strife return to the fold with "Witness A Rebirth" the bands first studio material in more than ten years.
Back in the 90's when California straightedge band Strife first appeared on the Hardcore radar. They filled the void left by bands such as Judge,
Chain of Strength and
Youth of Today and may have even tightened the screws a bit. While 1994's "One Truth" refueled us. 1997's "In this Defiance" inspired us.

When first hearing about the reunion and the making of the record I tossed it into the figurative abyss of reunited bands looking to relive old glories on the dance floor. However, unlike many of the unmentioned newly reunited and reinvented bands. Strife held a special place in my later Hardcore history. At a time when it seemed like I was holding on to a genre that had been littered with bands playing metal riffs and representing their gangsta' hood. Strife, along with a handful of bands gave me inspiration and made me feel that.... all hope was not lost.
So I proceeded with caution and an open mind.

On "Witness A Rebirth" the band fires on all cylinders at a breakneck pace. All the elements that made Strife stand out two decades ago coming rushing back as the band return to their relentless beast of a sound. Passionate vocals that renew old battle cries coupled with a relentless guitar assault and enough mosh parts to turn any square footage into a war zone. The album features it's fare  share of who's who from a list of bands I never really cared much for myself. Terror's Scott Vogel, Chino Moreno of the Deftones, Dino Cazeres of Fear Factory and Igor Cavalera of Sepultura add to the mix. Making one wonder if anyone from the actual band even showed up for the recording. Regardless of whether or not those players made any major differences in the records sound. It works!!!

Though the record doesn't really break any new ground. It doesn't do anything to erode the foundation and reputation the band worked so hard to create. It might just win over a new legion of fans. As far as reunions go, this is about as good as it's gonna get. James Damion
Posted by James Damion at 6:40 AM