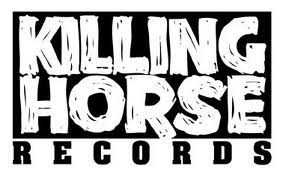 As we get set to celebrate the second anniversary of Killing Horse Records tomorrow night at Hoboken's legendary watering hole Maxwells; I spoke with Mike and Ryan about the event, the bands and the future of the label itself. In part two of my interview I decided to touch on the show, the bands and the promising future of the label. Here's what the guys had to say. James Damion

James: You recently lost one of the areas best outfits due to a breakup.
Did Ben Franklins break up come as a surprise or was it something you saw coming?

Mike: It was a bummer for sure, we had no idea they were breaking up. I dont think anyone did. It's OK - we wish them nothing but the best, but in the end they need to do what is right for them, and we respect that. Things like that happen, but we still love everyone from Ben Franklin, and we love their music. They were one of our absoulte favorite bands from the area. It's like anytime one of your favorite bands break up.
Ultimately it makes the Urgency 7" we did with them that much more special. I'm so glad we took a chance on them and got that record made.

James: Did it have an initial effect on the label? What were your first thoughts?

Mike: We were invested in them financially with the 7" we put out that year, so it hurt the promotion of the record, but thats no where near where our first thoughts were, we were just like "damn, we aren't going to get to hear anymore new music by them, or get to see any of more shows". The world needs more bands like Ben Franklin -they got it. Again, I'm just glad we got to document that. That's what having a record label is all about, and their records will always mean a lot to us personally.

James: The bands breakup was followed by the signing of rising stars
The Nico Blues. What was it about them in particular that blew you away?

Ryan: We've been big fans of the Nico Blues for some time now. That record, "Blame the Boredom, Blame the Basements" is absolutely phenomenal. When I first got my hands on it,
I think I listened to it for three straight days. In fact, our biggest regret at the time was that it had already come out, and we had seemingly missed the boat on it. Yet here we are about a year later and it's coming out again on our label, and we couldn't be happier. Even beyond the music though, we're big fans of the guys in the band. We had our first real exposure to them when Mike booked them at The Irish in Kearny back in September of 2010. We hit it off real well, and they were clearly a group of people with whom we would love to work, so I'm real glad we now have that opportunity.

James: Your planning on re-issuing their album
"Blame the Boredom. Blame the Basements." Will it be getting any special treatments such as remastering or bonus tracks?

Mike: We expanded the packaging to include lyrics, which is really cool. As for the record we wanted to leave the record as is, its as much a re-issue, a it is just out of stock, and we are picking up where they left off. We love that record as well, so we are really excited to be putting it out on Killing Horse.

James: Are there any plans for a new record with them in the works?

Mike: We are taking it one step at a time with them. They are not obligated to put anything else out on Killing Horse, but we definitely want to hear everything they record. If it works for both of us and the timing is right, then thats great.

James: Can you tell me anything about your involvement with
The Tiny Giants Artist Collective and if, how it would involve any future releases for KHR?

Mike: The Tiny Giants Collective has been awesome, it has created a real sense of unity in the New Jersey scene, or whatever you want to call it. It's really a great representation of why we got into the business of putting out records. From the second we met the guys in The Nico Blues and Holy City Zoo, who started the whole thing, we just seemed to be about the same issues, bringing people together, pooling resources, moving forward. so it's great way to help connect the dots. Recently its been growing a lot. Its a great way to get introudcuded to like-minded bands, and I'm sure that we will either put out a record by another Tiny Giant band, or get intorudcuded to a band due to our involvement with them. 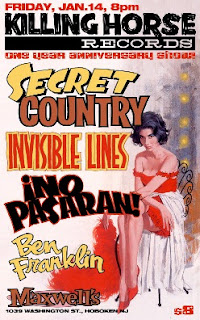 Ryan: Ah jitters - no, no, nothing like that. We're just so nonchalant and cool that we don't get the jitters... Actually, we're just super excited about the whole thing. It's our big birthday party that we put together, and at 2 years old, that makes us a pudgy toddler who just learning how to walk, so it's a great way to kick off a new year where we hope to find ourselves walking into new territories and bringing some great music to new listeners' ears. As for last minute thoughts, I think this is going to be a show for the books - we've got Cicada Radio, whose new material is blowing us away, the Nico Blues, who are making their Killing Horse debut, Invisible Lines will be debuting a new member - Mr. Geoff Bennington,
¡No Pasaran! will be performing their final pre-hiatus show - adding even more excitement to a guaranteed electric set, and Secret Country will be performing as an 8-piece band with the addition of myself on guitar and the alluring and talented Ms. Katelynn Siegle on vocals. It's going to be a night people are discussing so the only question is, do you want to be in the loop or not?

James: One of the bands playing that night, Invisible Lines, we're recently injured in a plane crash or something. How are the guys healing and will they be ready to perform?

Ryan: Yes, that is 100% correct, their private jet was shot down by Libyan rebels during a peacekeeping mission a few months ago. After fighting their way through enemy lines (taking no prisoners) they eventually made it to Tangiers, where there was the whole
"Fidelio incident" - which I can't go into for legal reasons. But they managed to get out of the country and fly back to the States just in time for the show. They've assured me that their injuries are not very serious (mostly just a few missing digits/limbs, some minor 2nd degree burns - nothing that a few aspirin can't fix) and they'll be ready to go Friday night.

James: I got to see
Cicada Radio perform the other night. The band is one of our favorites. I was just wondering if you're planning on getting around to releasing their EP on vinyl or CD any time soon.

Mike: Cicada Radio has just been getting better and better, Ryan and I just can't stop talking about how much they improve everytime we see them. That's a testament to them, honestly. It's great to see a band grow like this. As for "Imposter", we'd love to release it physically. At the same time the new stuff they have been doing really showcases how much they have been growing. We are currently discussing with the guys from Cicada how we want to handle that dichotomy. I can promise you this though, we will definatly be releasing something by them physically. Hopefully sooner than later.

Ryan: We've definitely got some things in mind for the remainder of the year, both current bands and new, however not all the details are hammered out yet, so I'm not going to go into the details. But, to give you a little taste, chances are good that we'll be seeing a new
full-length from Secret Country, and as Mike mentioned earlier there should be some new Cicada Radio material at some point as well.