Those Mockingbirds Prepare For Record Release with Show at Maxwells

As Those Mockingbirds get set to invade Hoboken's Maxwells to celebrate the coming release of their EP 'Fa So La' on Star Beat Music. I got to speak with the bands lead singer/guitarist Adam Bird about the upcoming, show, release and that tasty looking vinyl.
There are a lot of things I'd like to talk about with Adam in the future. Until then I decided to focus on what's happening in the upcoming days and weeks. Here's what he had to say. James Damion 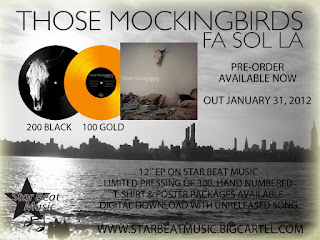 James: Congratulations on the upcoming release. I just purchased both versions of the vinyl (Black/Gold) last night.

Adam: THANK YOU SO VERY MUCH!!

James: Who came up with the idea for the different versions?

Adam: I believe it was Star's (Star Beat Records) idea to have different package options. We always like doing this kind of thing, offering a more full experience that is, but I think she proposed it to us initially, and we, kinda offered a bunch of ideas as to what we could offer for each package.

James: Was the initial release only available in the digital format?

Adam: Yea, we decided when 'Fa Sol La' was done being recorded that we would only do physical copies if they were vinyl because CDs are just too expensive of an investment for a band right now when all theyre gonna do is get tossed in a dusty pile once its ripped into a computer.

James: Can we expect any extras? Songs? Alternate Versions?

Adam: Yeah, we are including a bonus track called "Coast To Coast XY". Its a total re-imagining of the song that is much more vibe-y and laid back with Tory singing lead and myself singing her backup parts.

James: What was it that led Those Mockingbirds and  Star Morales and Star Beat Music to give 'Fa So La' a proper release?

Adam: I had caught wind that Star was looking to get into the vinyl game, so i sent her 'Fa Sol La' before it was released and told her that we would be interested in talking if she liked the record. A week later she got back to me and told me she wanted to put it out. Pretty clean cut.

James: You'll be playing Maxwell's this Friday night. Word has it that there will be a surprise guest. Care to spill the beans?

Adam: No bean spilling here, but its a really exciting thing for us to have another musician, especially one more accomplished, join us for a full song!

James: I have to tell you I had visions of Stevie Nicks taking the stage in a flowing gown.

Adam: If we had Stevie Nicks on stage with us I would've announced it instantly!

James: Will there be any other surprises?

Adam: Our set list is going to be very fresh from the last time we played in the area... lots of new twists and turns that we've developed over the last few tours. Its also probably the most high energy set we've ever done. a true blitzkrieg of guitars.

James: Aside from
Those Mockingbirds I'm not familiar with anyone else on the bill. Are there any connections with the rest of the line up?

Adam: The Sun The Moon The Stars is a band of vagrants that I was playing with for a bit about a year ago, and they are close friends of mine. Shayfer James is a good buddy of our bassist Rob. Birdhand is a band we met thru mutual friends a few months back and we will be touring with them soon.

James: The last time we talked you said you were practicing with the band for the first time since the tour. How long were you out and what were some of the hot spots?

Adam: We tend to go out for a lot of short runs instead of long ones because we can revisit the same towns more frequently that way. These past few dates have been notable for the fact that we were playing numerous 2+ hour sets, which is a challenge for a band with only two EPs out... but we made it work, tried out a lot of new things on the fly, and grew as a band because of it.

James: Are you going to be going out to support the release?

Adam: Yes, we have tour dates in February and March lined up right now, lots of them with Birdhand.

James: My first impression of the band was at The Brick City Sound Riot. That really wasn't that long ago. Can you tell me a little about the band and how you've evolved?

Adam: We've only been a band a little over two years... Year one was mostly us trying to do things as fast as we could, which to a degree got the ball rolling, but after awhile we regrouped, and Tory and I found new members in Rob Kevin and Jon, to finally start being the band we felt like we could be. So the past year we have really started to become what we wanted to be when we started, which was the kind of band who stuck out, whether in a good a bad way would depend on the listeners tastes i suppose, but either way one that stuck out amongst the sea of bands out there.

James: I don't know if you remember but that night I was up front taking pictures. We pretty much got up in one an others faces. I thought you were either going to kill me or use my ribs for reverb. Do you tend to lose yourself in the music when you're out there performing?
(Adam later pulled me aside and formally introduced himself.)

Adam: I do remember, and I'm not sure which I was about to do to you, but I'm sure it was one or the other. When we are playing I really tend to throw myself to the lions and see what happens. I do this because I find that it provides more entertainment for the crowd and they  are more likely to remember you and the songs you are playing. Sometimes I talk a lot and it can be funny, or, some shows, I don't talk at all and I end up throwing myself on the floor a lot.... but no matter what I end up doing, I tend to be in a sort of trance when we are on stage.

James: Judging from my limited experience working with you in the collective. You seem to be somewhat of an enforcer. Is that a fair characterization or am I completely off?

Adam: Nope, I am the kind of person who sees whats missing from a situation and attempts to do what I can to fix that. In Tiny Giant, there was no enforcer, so i became that. In Those Mockingbirds, I try to be the one who puts the gas in the tank.
Posted by James Damion at 6:28 PM