Friends, Bands Gather at Maxwell's to Celebrate The Release of Those Mockingbirds 'Fa So La' 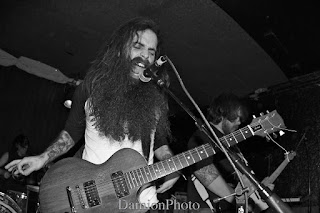 As The Sun The Moon The Stars opened the show I couldn't help but wonder, "How in the Hell is this band opening for anyone?" A few minutes prior to the show I had asked Adam Bird of Those Mockingbirds the 411 on the bands playing that night. He remarked "Can't Miss" when referring to them. The band, by far the heaviest I've seen at Maxwells since witnessing Kylesa take the stage in 2009. With a sound that reminded me of bands such as The Melvins, Sabbath and Botch to name just a few, how could you go wrong. Matthew Dwyer, Guitar/Vocals, has an electrifying stage presence. Later that night I snagged the bands album "Mindreader" which has been dominating my turntable since. The band is from West Paterson NJ and I highly recommend both buying the record and checking them out live.
TSTMTS Facebook 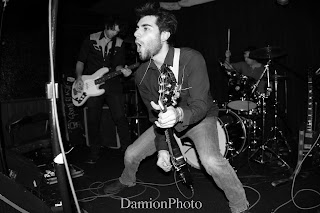 Following an opening band as good as T.S.T.M.T.S.'s can be a tricky gig but Birdhand made the transition seamlessly. Here was another first time experience for me that was incredibly rewarding. Birdhand have only been around for a short time but have made a lot of noise in that short period. Formed in Santa Cruz California but recently transplanted to New York City. The band has been both praised and produced by Bad Brains bassist Darryl Jenifer. The band has an excellent rock sound which seems to be getting harder to find with all the indie, alt and post bands dominating music today.       It's good to see a band that flat out, rocks. Singer/Guitarist Weeds vocals have a raspy quality that had me comparing him to Girls VS Boys vocalist Scott McCloud. Their set provided plenty of energy and solid musicianship. Birdhand definitely had that PMA going strong.
Birdhand on Facebook 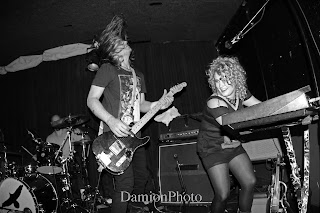 Just as Birdhand finished their set I headed away from the stage to catch my breath and seek out a few friendly faces I had briefly encountered earlier. I've been going to Maxwells regularly since the early nineties but since covering shows for Jersey Beat and of course United By… I rarely talk to more than a handful of people. I usually just take in the show while taking my pictures and just head home. These days I often go home with a pain in my neck considering how many friendly faces call out my name. It was really a blast seeing so many friends interacting and rocking out. Since becoming part of The Tiny Giants collective I've forged friendships and been introduced to so many creative and inspiring bands. Seeing so many of them there to support  Those Mockingbirds and all the bands makes me want to go to more and more shows while providing me with plenty of fuel for the bog. 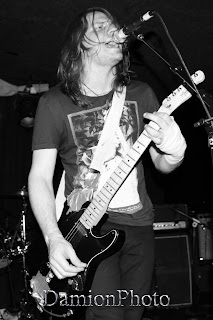 I originally caught Those Mockingbirds when they played the Brick City Riot Festival back in September of 2011. They played a great set of dirty, yet beautiful Rock n' Roll that night that really stuck with me. Since that night I've caught them a handful of times and I can honestly say, they get better with each and every performance. Though they weren't headlining this specific show it was indeed their night. With the official release of "Fa So La" and Star Morales of Star Beat Music in the house. How could it not be. 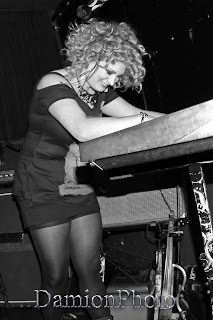 As the band took the stage and launched in to their set. I found myself doing something I rarely do, dancing and singing along to every note. These days I find myself going to more and more shows, adding more and more to my list of favorites. As much as I love a lot of these bands I could hardly name a song of theirs if I was cornered. Yet alone, know the lyrics and verses of each and every song. It's just a matter of numbers. When I was just out of high school I lived with a band who often played the record of the band they'd be sharing the stage with that weekend. Just so they'd be familiar with the choruses when it was time to join in. For me personally, Fa So La has just dug itself into my subconscious over the past months. It's that fucking good. Adam Bird is the perfect frontman. He has this presence that is endearing to both the crowd and the band. That and he can flat out sing and play guitar. As a whole Those Mockingbirds fire on all cylinders producing a sound I feel Rock and music as a whole has been missing for quite a while.

At one point during the set their surprise guest was unveiled in the form of World Inferno Friendship Society's Rebecca Schlappich, giving the band not one but two insanely talented and beautiful violinists. It was a really special moment to say the least. One of the highlight of the bands set for me was when they played "Coast to Coast." a song so good I felt my entire body moving spastically  to it's rhythm. The band ended their set briefly only to be called back for an encore of Fleetwood Mac's "Go Your Own Way". A song that hasn't been done justice since the band Seaweed covered it for the "Clerks" soundtrack back in the mid 90's.
Those Mockingbirds Facebook 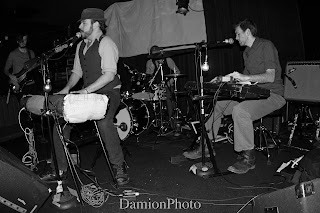 Closing the show was Shayfer James. As the  band took the stage an older photographer sporting some very sweet gear handed his camera to his lady friend and told her "Fuck these people, just push your way to the front and get some good shots." That little exchange hit me in all the wrong places and changed my mood drastically. I seriously thought about confronting him but a dick is a dick and he'll always be one. Arguing my point would be pointless. Though I thought, if only for a moment to just walk up to him and punch him in the throat, reality found it's way to my doorstep and I just removed myself from the situation. Douche bags like that should stick to taking pictures of barn doors and making coffee table books for bald guys with pony tails. Leave the shows to us beautiful people. As the band played I couldn't help but notice the crowd had changed so I made my way back to the bar fro my last Coke of the night. Though Shayfer JamesShayfer James Facebook  had a nice vibe about them I was already in the wrong frame of mind and didn't really hang for the entire set. Despite that little moment this was a great show all around, Lots of love to all the friends who came out to support the bands and one of the only establishments that continues to book great shows. I love you Maxwells. James Damion
Shayfer James Facebook
Posted by James Damion at 6:32 PM