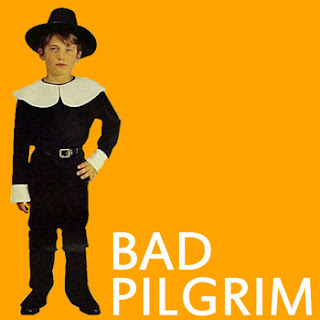 Ska music has had a way of weaving in and out of my life unexpectedly decade after decade since I was a wee boy who fell in love with the Specials, English Beat and Madness. Since then, various revivals and sprinklings of the genre have popped up, keeping the beat and making happy feat while paying homage to both it's originators and the ones who put their own stamp on it along the way. Though the genre rarely strays from the original game plan. It still manages to maintain my loyalty and serves as a "go to" style of music that never fails to bring out the goof in me.
Though this north New Jersey trio refers to  their style as punk. Bad Pilgrim come off sounding more like 90's Ska revivalists like Operation Ivy and Reel Big Fish than anything. The trio (sorry, no horns) offer upbeat, quick pace songs with skank inspiring riffs.
All of which are delivered in short form with each of the seven tracks being delivered in around two minutes or less. The band has a handful of local New York, New Jersey and Pennsylvania gigs scheduled to support the EP's April 3rd release.
Check them out here. Bad Pilgrim Official  James Damion