As I entered Montclair's dark, cavernous dungeon The Meatloacker. I thought to myself the same thing I think each and every time I enter the towns long standing ass in the wall. "What the fuck an I doing here?" It was almost 10:00 pm and much of nothing was taking place. After standing around for a couple of minutes I headed back to my car and started the engine. Lucky for me, I changed my mind once again and decided to go back. The following is what transpired. 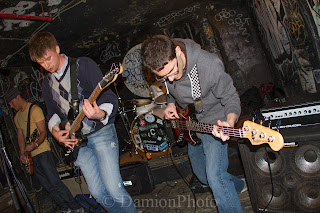 I was not the least bit familiar with Old Bridge, New Jersey's The Luna Laval and twenty minutes after they had taken the stage, I still wasn't absolutely sure if what I was witnessing was a prolonged sound check or the bands actual set. To be perfectly honest, if it turned out that sound check happened to be their set, I would have been just as impressed. The band played a a complex musical style that somehow escapes a lot of the trappings of genre addicted listeners. A trait that can both open and close doors for a lot of bands, depending on the listener. As I stood there I found myself somewhat mesmerized by Tom Risi's tasty Bass play and overall movement. 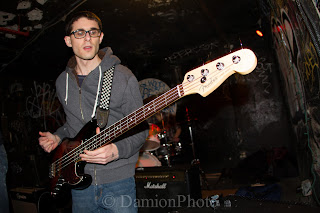 Though the bass has become my most appreciated instrument in recent years.
I find most of my favorite players are too often, stationary musicians who blend into the background, rather than the forefront. Risi's movement and presence reminded me fondly of Nate Mendel (Foo Fighters,
Sunny Day Real Estate. Brotherhood.) Considering they were the shows opening band and it was my first time seeing them. They left a lasting impression on me. Definitely a band I'd like to see and hear more from. The Luna Laval

The time in between bands can often be long and socially awkward for me. But just as the stage remained empty. There was music and a sense of community happening on the floor thanks to the warm sounds of John Bentonamo's ukalele playing. Talk about a spirited individual. At the moment I didn't want to upset the intimacy of the small gathering by stepping in. Instead, I decided to loom close enough to take in all the mirth and celebration while not disturbing any tribal rituals that might be occurring. 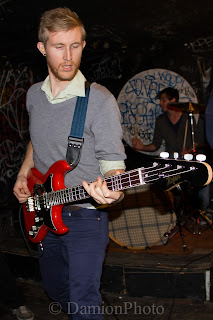 The Harrison Four quickly assembled and though this DC area band was a late addition to the show. They made their presence notable immediately. Even as the band tuned up I could swear I heard little Minor Threat and Fugazi riffs being tested. Their set had a warm upbeat nature that was musically impressive, while remaining fun and light hearted. The addition of a horn player for the show didn't hurt things one bit. I felt a strong Lookout Records meets DC vibe. The band even busted out a Cleveland Bound Death Sentence. Impressive, to say the very least. I looked the band up before writing this and found out their also vegans. Kinda cool if you want to break bread with them after a show.
The Harrison Four 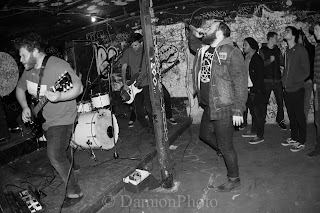 Raleigh's Empire were up next and I had the feeling I was up for something dark and heavy when I got a look at the material they were selling at the merch table. The band did not disappoint one bit. Turning the floor into their extended stage and bringing it to the small crowd of on watchers. I kept a safe distance from lead singer Ben Daughtry. Steering clear of his spitting fits. I like my bread just as crusty as the next guy. Just don't want to get caught in a shower without an umbrella. The band sounded great and brought an entirely different energy to the show. I picked up their CD "Shedding Skin" and should have some kind of review posted in the near future. In the meantime, check out the bands page and see for yourself. Empire 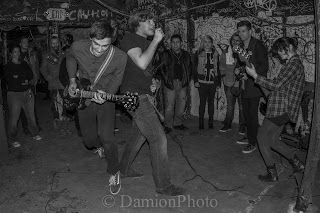 After three really good and diverse acts had played, I was feeling a lot better. Three bands down and two to go. Polyphony were next and just happened to be one of the two bands I was there to see. If you follow the blog you may recall they were one of the first bands interviewed for UBRS and if I remember correctly, the first guest interview from Shannon Perez of I Hope You Die. I was really shocked that the bands singer Marshall Davidson even recognized me after only meeting me once. It's been two years and though my interest in the band hasn't wained, I think I've missed a ton of shows. The band launched into their set and I could instantly see and hear the musical growth these young but very talented people have gone through. When I originally caught them at the Court Tavern they sounded raw but very good. They also seemed very stationary. Perhaps confined by the small space the  room, just to the side of the entrance, permitted. On this particular night, the band had all the room they needed to release their unbridled energy along with any other odors Marshall "Marsh-mellow" Davidson was omitting at the time. Polyphony would best be described as a screamo outfit. (Judging from the fact their lead singer seemed to be vomiting into a bag in between songs.) However, they are quite musical. They've changed drummers since the last time I saw them and as far as these ears could tell, it's brought they're blitzkrieg assault to a new level. Shortly into their set it seems the nights arctic temperatures were more than their brave frontman could handle and with some help from the aforementioned John Bentonoma's help, the shirt and eventually the pants came off. Upon witnessing this one can only hope Marsh-mellow can find some time in his busy schedule to hit the weights and get some much needed sun. Polyphony 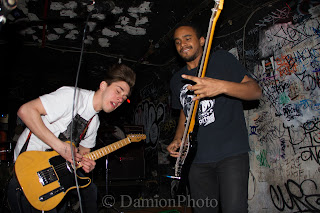 By the time Ola Madrid hit the stage, it was well past 1:00am and to be honest, I was quickly fading. About a month back the bands guitarist Dylan Young sent me the bands September 2012 debut release
"Distance to Decay".
The five song EP has been getting a lot of play here at the UBRS headquarters.
The chance to catch them live seemed like a no brainer.
I came to this show with high expectations for this band. To say they raised the bar would be the understatement of the early year. The bands energy level and musical proficiency immediately ignited the crowd and gave me the little extra boost I needed to get through the late hour and the drive home that followed. The band has a new record due out this spring. It would be wise to keep your eyes and ears on the look out. Ola Madrid
For someone who was about to leave before the show had even started, this turned out to be the best and most eclectic show in recent memory. See you all next time.
James Damion