On the Wheels of Steel with DJ Laytonic

I've always been interested in the art of spinning records. Turntable science, mixing, the flow of hands from record to record and of course, the unique sampling I always found joy in. The ability to, not only move the crowd, but to control it's movement. My early childhood included an education from some of the very best. Afrika Bambaataa, Grandmaster Flash, Jam Master Jay, Erik B. and Terminator X too name just a few. As I got older my interest in DJing grew and though I did my share of DJing in the CD format. It never came close to the joy and authenticity of putting the needle to the record and exploring the grooves on the vinyl. I hope that talking to some of my favorite current DJ's will bring me closer to that. Thanks Layton, James Damion

James: How did you get into DJing?

Layton: I've always wanted to DJ since I was a kid.
I grew up listening to a lot of cassette tapes my older cousin would give me when he wasn't using them anymore. Most of the tapes were from LL Cool J, Run DMC, and
the Beastie Boys. This would be my intro to hiphop music. From there I got more in tune to other artists like A Tribe Called Quest, The Roots, De La Soul, and Mos Def. I always had a love for hiphop and hiphop culture since I was a kid, but was only a fan and avid listener.

Recently I moved to Coney Island, away from most of the people I know that live in Williamsburg and Greenpoint. It's a lot less expensive and allows me to focus on my music more intimately. This time away from the circus of non-stop nightlife and music events gave me time to get back to things I always wanted to do. So I went out and bought a cheap set of turntables and a mixer and borrowed a lot of vinyl from my Dad's collection. Within a few weeks I piled up on all my favorite hip-hip singles from growing up and stuff I'd heard over the years. Exploring parts of New York City for record shops and building up a higher score on eBay, I soon became a vinyl junkie.

Layton: You'd be surprised how much information is out there online. Even though I grew up watching a lot of DJing from music videos and DJ battles, I just tried to figure it out on my own. I've found a ton of videos on YouTube that have helped me setup my turntables correctly and learned to do a few mixes. I'm a big fan of Electronic and Techno DJ's. I watch and listen to a lot of guys like Jamie XX, Actress, Caribou, and Lone. These guys do a lot of blending and smooth transitions between songs so there's never a gap in the music. Like a stream of consciousness or a continual thought. This technique is something I try to incorporate into spinning hiphop instrumentals. 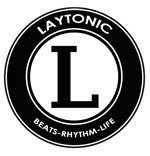 James: Tell me a little about Laytonic and what you do/offer. What makes you stand out / stand apart? Is there a specific genre or music style you focus on?

Layton: Laytonic is a nickname that stuck with me from college and now it's a way for me to explore the elements that make up hip-hop music. I focus a lot on the production that was coming out in the 90's. Producers like DJ Premier, Pete Rock, J Dilla, and Q-Tip are some of my heroes. Part of me feels like not enough people really embrace their music. So I started collecting all my favorite cuts on vinyl and made sure the singles I bought had instrumentals. There's a lot of jazzy and rhythmic beats made by these amazing producers and I wanted to really create that vibe as a DJ. Even though a lot of the stuff I play is from the 90's, to me it has such a classic feel that it can't feel dated. Aside from the hiphop instrumentals I play, I also spin a good amount of R&B/Soul records from the 80's like Sade, Anita Baker, and Michael Jackson.

James: Where do you spin? 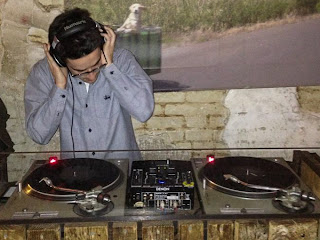 Layton: You can see me spinning in Brooklyn and Manhattan. Right now I'm working on a special event at Pianos Sunday April 7th during brunch. It's gonna be real chill and a perfect way to relax after a weekend of partying.

James: You grew up in the age of compact discs and are currently in an age of digital downloads. How did you originally get into vinyl.

Layton: One day a good friend of mine was explaining to me the process of digital media vs. analog. He told me about binary code and how digital media is comprised of a series of 1's and 0's to make up the code. Even though this code is minute and too small for the average person to hear a difference, the binary code is something our brains as listeners has to compute and interpret, whereas when we listen to an analog sound like vinyl, there is no binary code. The sound waves move out of the speakers as air and our eardrums are being stimulated by the air. So its a more natural way of listening. Have you ever tried to turn up your favorite song on an MP3? It can be pretty painful especially if you're wearing headphones. This could be my imagination, but there are times when I feel like I can turn the volume up pretty high when listening to vinyl and only want more. Like Dilla said
"Turn It Up!" A Little Louder!".

James: You recently travelled to Philly for Dilla Day. What was your introduction to his music?
Did you come back with anything particularly special or unique from that trip? 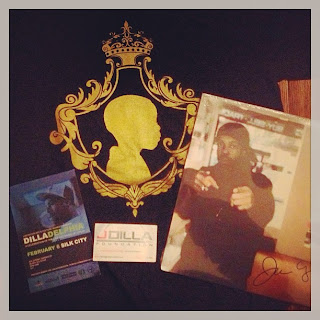 Layton: This past February was Dilla month. My all time favorite and hands down best producer of all time is J Dilla aka Jay Dee. He's been credited for creating Neo-Soul and gained a lot of attention for the Detroit music scene. The production he's done for groups like
A Tribe Called Quest, Common, Erykah Badu, Slum Village, The Pharcyde, De La Soul, Madlib, and many more would not be who they are today if it wasn't for J Dilla. I first got exposed to his beats back in 1996 when I first heard
"Stakes Is High" by
De La Soul. I wasn't even a big De La fan at the time, but that beat was so compelling I had to have a copy. From there I started hearing his name on other amazing beats from Tribe, Busta Rhymes, and Janet Jackson. He soon became a household name for me and I wanted everything he put his mark on.

During my first year in college is when I first heard J Dilla's own group called Slum Village. He did all the beats for their first 2 albums and did his own emceeing for the first time. It was some of the greatest music I've ever heard. To this day I still listen to those beats and play some at my shows. Just a few years later from hearing that first Slum stuff I found out that he passed away from Lupus and rare blood complications that he'd been struggling with for years. He was born on February 7, 1974 and died on February 10, 2006. Since his death, fans from all over the world have embraced his legacy and have celebrated his life and music during the month of February. Now almost ever major city has an event in his name. This year I ventured down to where I grew up in Philly and attended Dilladelphia.
The place was packed with Dilla heads and there were performances and artwork shared that night in honor of him. The J Dilla Foundation was there as well and they have some of the best J Dilla merch where proceeds go to J Dilla's estate (his hospital bills are still being paid off). So I bought a couple t-shirts and a 7" single for my collection.

James: What's your vinyl collection made up of? What are the prized possessions? 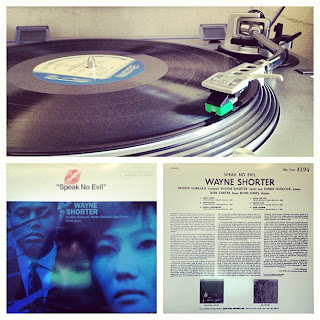 Layton: All styles. I enjoy collecting a good amount of R&B/soul records from the Motown era. Artists like The Spinners, The Stylistics, Marvin Gaye, and Diana Ross can be found in my collection as well as rare and hard to find Hiphop singles like the underground hit
"Inner City Blues" by Rezidue (a New York artist featured on DJ Premier's NY Reality Check 101 Mixtape). A big supporter of Stones Throw, I own several of their releases including Jaylib, Madvillian,
Karriem Riggins,
Georgia Anne Muldrow, and Homeboy Sandman, all on vinyl. Through hiphop I got introduced to a lot of electronic music. I believe there's a time and place for all music. Listening to artists like Lukid or Lone really set a certain mood that can be atmospheric and up-beat. I also enjoy staying up to date with current trends in indie/alternative rock like Toro Y Moi and Atoms For Peace.
And I can't forget my college roots in jazz with my favorite Blue Note releases like
Miles Davis "Kind Of Blue", Grant Green "Street Of Dreams", and Lee Morgan
"The Sidewinder".

One of my prized possessions is a vinyl record by jazz guitarist Wes Montgomery.
This was a record owned by Dilla. I found out that his mother Maureen Yancey was starting to sell a portion of his record collection to fans through eBay. Each record mailed out included a certificate of authenticity and a letter signed by Ma Dukes herself. Even though Dilla might not of used this record for one of his beats, it's still feels amazing to own something that belonged to him.