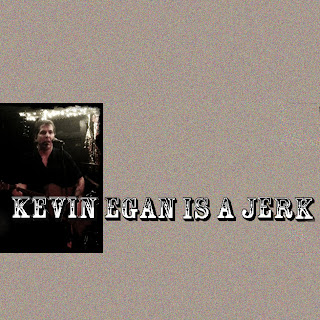 "Kevin Egan is a Jerk"
the latest musical endeavor by singer/author Kevin Egan. Though you may know Kevin best from his late 80's / early 90's work with NYHC's Beyond and 1.6 Band. His newest release is reflects more on his later recordings as
Rules of the Fort and most recently, his work with the Country act
Twenty Four Thousand Dollars.

"Kevin Egan is a Jerk" features nine tracks of folky acoustic storytelling that is both laid back and heart warming.
The stripped down approach highlights the fact that life and at times music, is about the simple things. "High over Queens" and the somewhat airy
"A Shitload of Songs" were standouts for me. In listening to "Kevin Egan is a Jerk". I felt that each song built on the previous one. It just felt as if this EP got better with each song. Though I think Mr. Egan's voice will never get him to the lightning round of American Idol or The Voice. It's good to see the evolution his music and sound have gone through over the years. James Damion


Kevin Egan is a Jerk  Bandcamp
Posted by James Damion at 4:56 PM