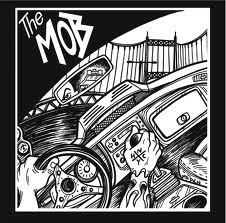 Thirty years after releasing one of the greatest Hardcore EP's in Punk/Hardcore history with
"Upset The System"
New York City's The Mob return from utter obscurity with three slabs of Hardcore for the senior circuit. After reforming for a set at NYC's 'BNB' Bowl in 2012 the Mob headed to the studio to record their first record in over twenty-five years.

"Back to Queens"
(An ode to the greatest Borough NYC has ever known) opens up the short set with a good pace and energy. It took hold of me with it's opening riffs, rolling bass and up tempo beats.
Ralphie singing the chorus "That's where I got my walk, that's where I got my talk. going back to Queens, that's where I belong." Coming in at 2:47, this stellar track kept me on my toes throughout it's entirety.
The B side follows with a trashier sound more reminiscent to the ancient Mob style. Unfortunately, "That's It" and "Zoo Crew" are  instantly forgettable to the ears.

Though the band were seminal to a lot of kids my age getting into Hardcore. (And particularly in Jackson Heights, Queens.) But personally, the bands music, it's influence and their Hardcore legacy faded as time went  on.

This record doesn't really do anything that inspires one to look at the bands storied past; Nor does it get the listener eager for the future. I would suggest tracking down the bands classic work on "Upset the System" or "Truth Over the Airwaves." This just seemed like a lot of hype and little reward. The band is back in action and is planning more releases for 2012. One can only hope they get better as they come. James Damion