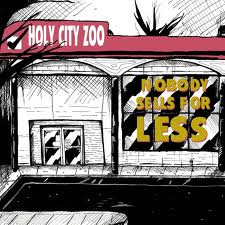 As I headed downstairs I peaked downward into the hallway thinking to myself "this is the day that fucking record is going to show up in my postal box." "This is the day my train of thought will get the tracks it needs to plot its course."
As of late the mail man has been putting most of my records inside the door due to a rash of thefts in the neighborhood." Truth be told, I've been listening to the record for some time now. I just needed to have my hands on the actual product in order to give it the treatment I felt it deserved. That alone would unleash the Hunter Thompson within. Holding the record would rejuvenate the thoughts and feelings that crystalized the numerous conversations and transactions with band members about the songs, the recording, the packaging; All building up to the sonic orgasm that would be "Nobody Sells For Less".

Holy City Zoo are a hard band to generalize. The New Brunswick, NJ powerhouse take all the best elements of Hard Rock, Post Hardcore and Punk to form this unstoppable juggernaut. As I put the needle to the record I was immediately hooked by the full blown chaos that ensues with the the opening of "WW5". The track is a mind fuck with it's sonic prowess. Match that chaotic discord with an anthemic, singalong chorus and you've got a track that will have you climbing up the walls.
"Afterburner" opens with post core guitar riffs that immediately had me thinking of the band Quicksand. Joe Lanza's voice cries out like a madman, perfectly highlighting the controlled chaos that surrounds him.
The B side opens with "Paper Beats Rock" a track highlighted by a dynamic, layered guitar sound that has its share of beauty and eccentricities. "Meadowlark Lemon" opens with a nice sense of melody that gives way to a crash and burn style that really ties the record together nicely.
Add to that the bonus download tracks and you've got a record that's worthy of worship and celebratory human sacrifice. I had very high expectations for this record coming in.
Thanks to Holy City Zoo for far exceeding them. James Damion