An Interview with Chris Wynne of In Effect Hardcore 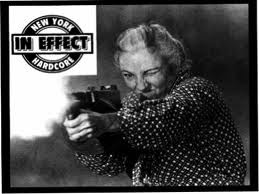 1988 was a really big year year for me. I had just graduated from High School, moved back to my old neighborhood and had managed to get a sweet apartment with Civ, Walter (Gorilla Biscuits) and Alan (Beyond). I had a good job,
a somewhat dependable motor vehicle and had immersed myself in the New York Hardcore Scene. Fanzines like New Breed, The Village Noize, Yes Zista and my zine Unite documented a music culture that was so underground, you risked breaking a sewer main every time you went to a show. It was the year In Effect fanzine released it's first issue. During two decades and twelve issues In Effect Fanzine covered the NYHC scene with a fervor and dedication not seen since or before. After resurrecting Unite Fanzine as a web presence in 2008.  I met up with Chris and talked about old times and in particular In Effect. At the time, it seemed that a return to glory wasn't in the cards. Fast forward four years and In Effect Hardcore is back with the same dedication, determination and hard headedness he's always brought to the table. I recently had a chance to catch up with Chris again . Here's what transpired. James Damion


James: What made you decide to bring back In Effect after all this time?

Chris: The actual making or production and distribution of the printed zine was a time killer. Everything involved from the interviews to gathering info from the bands, checking the
PO Box and mailing out promos etc… time consuming beyond belief. I loved doing it all but after 12 issues it really burnt me out. I saw a website as an easier way to do this in that there is no physical product to go out and have to drop off or sell or hold on to a consignment sheet for months while the store sells what you gave them. I saw a commercial for a web server pushing a very easy to use way to make your own website and the wheels in my head started turning. Once that starts it is all over as I get very determined once I want to do something. That is just the way I am wired and probably the reason why I will burn myself out down the road as well.

James: With your history and reputation I can imagine there was a lot of excitement and buzz involved.

Chris: I initially did not want to call it In Effect. I didn’t want to be looked at like a re-union band in a way. Being old and not as good as you used to be!  (LOL) I wanted a fresh start and if it ended up looking like crap it would be easier to walk away and it wouldn’t have messed with what In Effect had accomplished already. I couldn’t come up with any good names since almost every dot com name you can think of is already taken and on advice of some friends caved in and decided to use In Effect. Even that was taken so I became In Effect Hardcore. The first 2 weeks saw 3600 visitors to the site which is pretty good considering my advertising is me posting on Facebook and handing out In Effect stickers at shows from time to time. We just hit our 5 month mark as an up and running site and we are closing in on 32K visitors. That number to me is pretty impressive and I never thought it would get that kind of response when I started.

James: You have an excellent group of contributors adding content to the site. How did you go about seeking out the core contributors?

Chris: When the site went up and running it was just me and my wife Bridget who knows her way around a computer a lot better than me. I did the writing and she did the layout.
Things that surprised me are that there have not been that many submissions by bands or labels of things to review. I almost have to chase them to send new releases and the other part of that is the labels hardly ever send physical content. Everything is digital downloads which saves them a ton of money in shipping. Anyway, for writers I got Freddy Alva who got me my start as a zine dude when we both worked on his New Breed Zine
back in 1773 (Jokes), Brett Hardware who was one half of Hardware Zine, a very well put together and informative zine out of NJ, Tim Edwards from the UK  who contacted me via email saying he would like to contribute and backed it up by doing great reviews each time and Brian White who is a local scenester who books shows here on LI, takes photographs at shows, and has done a few reviews, a good guy to have around and has a lot of contacts since he helps books shows with Howie Fightback. Jason Patton from Jersey is another contributor but doesn’t write. He is an old school fan of the zine and takes photos at like every show. He has provided some great updates in that he goes to a show and at 4am I will get 40 pics from a show that just ended and within an hour of me waking up there is an update of a Bold re-union show that just ended maybe 8 hours earlier. That is one aspect of a website that blows away the printed version of the zine. These folks that I mentioned plus a gang of photographers from all over make In Effect tick these days.

James: When you set out did you have a grasp of how many of the bands you were covering twenty years ago were still active or even making new records?

Chris: Yup, most definitely. A misconception from some of my friends is that I was not into this music after I stopped doing the zine. After I stopped doing the printed zine I actually enjoyed everything more because I could just relax and not listen to an album with my mind thinking about what I wanted to write in a review. I applaud the bands that get back together and write new music and question the ones that get back and just play their old songs over and over.

James: When we spoke last you mentioned how much stress and pressure you put on yourself in the days when you were working on the zine. How you became this lunatic when it came closer to printing each issue. Has that changed being online now? or are you still the head case you were back then?

Chris: It is easier doing In Effect this way, no doubt. I love that I have nothing to sell. My overhead costs are the webserver fees which are not much and I made a shitload of the old In Effect “Grandma” logo stickers which I mail out for free to other countries for friends to hand out where they live… That’s about it so it is stress free on that end. There are no deadlines in the hardcore community. You send a band questions for an interview and they may or may not answer you 2, 3, 4 months later? Some things never change and it has been like that for as long as I have been into this stuff. “Our 7” will be out in 3 weeks” and there you are 8 months down the road and you see it come out. I personally need to get some of that mentality in me to do this long term. My work ethic is one where if I am not doing something to make the zine/site move forward then I am being lazy in my mind. I am still a head case and the head case will be let out of the cage eventually. I see myself burning out again eventually and making a comeback 10 years later well into my 50’s. (LOL) I will still listen to the Breakdown demo in my 50’s by the way.

James: What kind of goals and expectations do you have in bringing it back?

Chris: The expectations are the same with when I started doing the printed zine and that is to help bands and help the hardcore music scene. Everyone knows the big name bands and I like to help the smaller bands even more. I am a huge fan of No Redeeming Social Value and have helped them in the zine over the years and they have always thanked me and told me how much mail they would get saying people read about them in my zine. To me that is why I do this. I see a band and ask why more people aren’t into that particular band and I try to make it change and get their name out there more. The new name now is BroLoaf from Arizona. Look ‘em up, they have Todd Hamilton from District 9, Warzone and are really good. As far as goals go it’s just what I can come up with on the fly, I haven’t changed much. The website has been fun to put up and see the reaction and as long as it is fun I will keep it going and hopefully along the way people reading it find some new bands, some new music and maybe some of the readers will start their own site, maybe a zine and keep this hardcore shit going for years to come.

James: I feel as if the dye is set. Good luck brother.