An Interview with Everymen's Tom Barrett

Tom Barrett is a Jersey City musician best known for his work with ¡No Pasaran!,
WJ and the Sweet Sacrifice and
The Everymen. I first met Tom in 2010 when I interviewed the band ¡No Pasaran! in Clifton. Since then our paths have crossed numerous times but due to my own shyness, I've rarely gotten further than a passing hello or a friendly nod. In talking to Tom a bit more over the past weeks; I've grown to learn that shyness is a characteristic we both share. Here's my shot of changing that for at least one of us.
James Damion

You very recently had some of your gear stolen. Can you share what happened and what was taken from you?

Yes, somebody broke into the trunk of my car across from our apartment in Jersey City while we were sleeping and stole my keyboard, electric guitar and suitcase filled with pedals and cords. It sucks. I'm still reeling from it.

Were you at all surprised by the outpouring of support from friends and in particular the members of the Tiny Giants Collective?

I was kind of surprised, just because apart from  playing in a couple of TG-affiliated bands and chiming in with the occasional comment on the TG Facebook page, I'm not very participatory in that world. I haven't been to any meetings and don't make it out to a lot of the shows, only because I've become a homebody and don't go to a lot of shows in general anymore. I was definitely moved by all the gestures, though. It speaks volumes about their character. They're good people.

One of the things that took me a lifetime to embrace was accepting help from friends or family when I needed it the most. You seemed pretty reluctant with the idea of us possibly chipping in. May I ask why?

That's just my nature. I'm stubborn. It's the same thing as when someone offers to grab my amp or something at a show, I'm real quick to say no thanks most of the time. It's a
knee-jerk reaction. Simple as that.

I missed your fairly recent solo experience but was very touched by the video recording. You're pretty used to being the guy behind the drum set. Was it a challenge for you to get up there and put your heart on display like that? I ask that because the performance was quite touching and real.

Thanks, I appreciate it. I wouldn't really call it a challenge because by the time I played that show, I'd already spent the previous few months cutting my teeth at open mics around NYC. Those were a little terrifying. I just tried to have fun with it and enjoy myself, and it seemed to go over well. I didn't think of it too much as putting my heart on display or anything, I just treated it like a normal gig. If there was anything I was nervous about, it would be that I don't have a ton of songs and had to play a 30-minute set. It wasn't too hard. I played a few covers. 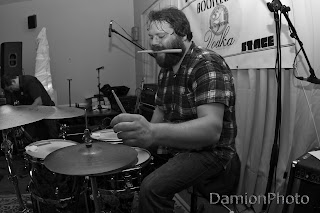 How did that come about and what inspired the move from the drums to the keys?

Well, I'd been wanting to do this for a long time, to write songs and get up and play them for people. I'd spent many years wandering around the house playing Beck or Lou Barlow songs or whatever, trying to write my own all along.
I've always been very self-conscious about my low, warbly voice, though. I'd hardly play anything for anyone, even covers. It was only last fall that I'd finally thrown some caution to the wind and let some friends in on some songs I was doing. They gave good feedback so I started playing out and doing some more recording.

I'm actually in the middle of making a record with my friend Tommy Unish right now, whom you've seen jump onstage from time to time with No Pasaran. He recorded our
"Porter in the Making" EP, and he's manning the controls on this one as well. It'll be finished soon.

The move to keys was inspired by a combination of wanting to change things up and being sort of bored with the drums. Mikey had asked me in the past to play keys with The Everymen, but I was always too busy. Now with No Pasaran on hiatus and being out of WJ, I finally have the time.

The last time I saw you perform was with The Everymen. Are you in the band now or was this a fill in situation? Is this the first band you've played in where your not keeping the beat?

This is not the first band I've not played drums in. I started out playing guitar, so that's what I was doing in the first bands I ever played with, back when I was like 16 or 17. Mikey and I kind of got to know each other from playing in American Watercolor Movement together five years ago. He played guitar, I played guitar and keys.

With The Everymen, I'm as much a part of that band as I can be. They have what I refer to as a very strict open-door policy, which is nice for me. I'm very committed to the band, but also free to do what I want outside of it. I can't make it to all the shows, but try to be around for as many as I can. So far, it's been a blast. I've only been a part of it for a few months and I've already played like 20 shows. It's very active. Mikey's a driven dude.

In mentioning The Everymen and your solo performance I can't help but wonder about
¡No Pasaran!. I was kind of shocked when I heard the band had decided to go on hiatus.  What was the reason behind it and is it a break or a break up, so to say? 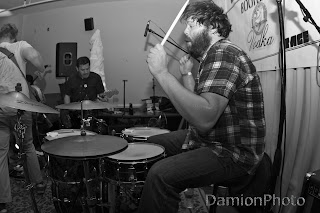 It's a break. It's sort of my doing. We met up one night back in December to talk about our plans and I kind of sprung it on them that I needed some time off, at least a few months. I don't think they were too surprised. There were a few reasons why I felt it was necessary, the main one being I wanted to devote some time to something new and different, like the acoustic stuff. They understand, it's completely amicable. Maybe we'll get it together at some point, but right now Eric and Romel are happy in Life Eaters, and I'm happy doing my own thing and playing in the Everymen.

One of my favorite musical moments of the last year was your performance with WJ and the Sweet Sacrifice in Newark. I had been hearing great things about the band but that was my first opportunity to see them live. Do you still perform with them?

Nah, I left in the fall. I was a part of that band for two years. It was a lot of fun and I had some great experiences with them, and I became closer with the members of that band than I ever was before, but there was some serious frustration going on. I won't go into any details, but it had been brewing for a while. Again, they weren't surprised by my decision. I left on good terms and on a high note. That Brick City show was a fun one.

Is there a special bond that band members have that people outside the group can never quite break or fully understand? I ask this out of pure curiosity because I've always sensed it. This impenetrable force that remains unbroken.

Definitely. I've been in a few bands, sometimes simultaneously, and each had its own set of quirks and idiosyncracies that outside folks probably didn't get, for sure. A band relationship is a relationship like any other, though. I have friends with whom I share this strange senses of humor that might be completely lost on other people, but they understand it perfectly at the same time. Maybe not the quirks themselves, but why they exist. It's the same with bands, though I've never taken any kind of us-versus-them stance on it.
You just stick with the people you're attracted to and hope things work out.

In the times we've talked I've mentioned social awkwardness/anxiety and the sense of being just outside. You've always struck me as a shy, kind of introverted person. How would you describe yourself?

I'm pretty moody and mostly like to keep to myself. I think some people might think I'm sort of hard to approach, but it's not really true. I've come out of my shell a bit.