Orchid was an Amherst Massachusetts screamo band that existed from 1999 to somewhere around the year 2002. While some reference Orchid as pioneers of the screamo movement.
Many will argue that the style was created and well established long before the band ever picked up an instrument. All genre trappings aside. The bands sound was highly dissonant, fast-tempo and chaotic. 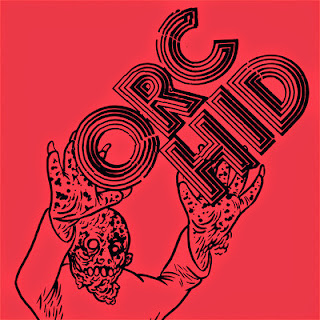 "Totality" features the bands complete singles collection,
24 remastered songs taken from the original recordings, including comp tracks and one unreleased track. All released by Amherst's Clean Plate records for the first time on LP with a 20 page, full color,
7" x 7" booklet and download code.

While I'll be the first to drop cash on a good discography or complete collection of even the most obscure bands.
This particular one was nearly impossible to sit through. Though there were a handful of bearable tracks here. 'Intelligable Audio', 'She had a cold, cold heart' and 'Stagnant' come to mind.
The high points are so few and far between. It makes the other 20 songs way past unlistenable. Orchid's "Totality" remind me of why I so quickly tired of an entire sub genre so many years ago. As far as 'Totality' goes. I can only recommend this to the most die hard Orchid fans or those who still cling to the sound they produced during their life span.
James Damion

Top Shelf Records  Get it Here.