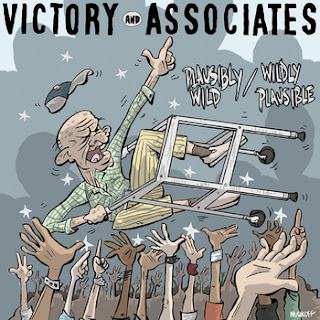 After watching a sweat drenched
Victory and Associates turn a small, yet intimate Maxwell's crowd into their very own army of devoted supporters. I was eager to get my hands on anything and everything the band had ever produced.
(Well, minus the tremendous pools of man juice they left on the stage that night.)

If "Plausibly Wild / Wildly Plausible" is any indicator to what this band can accomplish. Then I may have just found a new band to worship at the alter of Rock n' Roll.

Victory and Associates three song stinger mixes anthemic classic rock with punk rock aesthetics, energy, angst, bombast and balls out fun. "Plausibly Wild" is a feel good rocker with a chorus that would best be described as a power pop "Wild in the Streets". While "Wildly Plausible" slows is down a bit. A danceable ode that had this listener on the tip of his toes screaming every note. "Friend Rock City" (a bonus that comes with the download) is a rock anthem if there ever was one. To add to this already stellar record is cover art by the enormously talented Brian Musikoff from local heroes Stuyvesant.

The band is just finishing up their tour and will be heading back to sunny San Francisco where they will be opening for the legendary Mike Watt. One can only hope they'll be back again soon. James Damion

Get it Here
Posted by James Damion at 3:21 PM