No Mistake - Connect the Dots...Complete the Puzzle 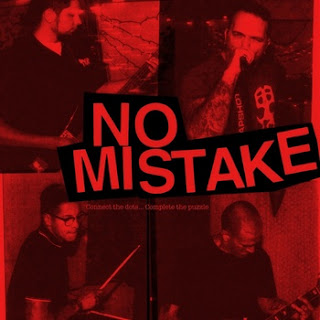 In the months leading up to
No Mistake's quick rise from unnamed project to full fledged band I was contacted numerous times by guitarist and old friend Mike Bromberg. (Mike Bullshit, GO, SFA) Being asked my opinion on everything from the bands name, sound and even art. Staying in touch with someone like Mike is always a positive. Being asked my thoughts on a project he deems important is well, pretty special.

California's No Mistake made a very lasting impression with this thirteen song gem. "Connect the Dots...Complete the Puzzle"is an out and out thrasher, featuring thirteen songs that come in just over fourteen minutes. Fast HardCore Punk that brings us back to the early ThrashCore we first fell in love with in the early to mid 80's. As I listen closely I'm hearing elements of Negative Approach, SSD, Crass and even New York's Straight Ahead.

Greg's verbal attack is amazing. Despite his angry, snarling growls. The lyrics lean towards the positive side. Something I miss hearing from a lot of my HardCore brethren these days. Surround those vocals with drumming that mirrors that of an artillery barrage, outstanding bass work and  Mike's impressive attack on the strings You've got an impressive debut on your hands.

The band is already playing alongside some impressive bands such as old friends
Citizens Arrest, Outlook and Night Birds. They've also rolled out production on some sweet looking gear. GO check them out now.  James Damion