Wednesday night Dave and I headed over to Teaneck's Mexicali Live to see OFF! play with one of our mutual favorites Double Negative. It was a night of firsts as we had never been to the club or seen any of the bands perform live. With Dave G.'s magical GPS system and Mario Andrete' driving skills we were able to locate the place within minutes before the show opened. There were lots of friends and familiar faces in attendance and the overall vibe was friendly and laid back. We were both impressed with the club. Big yet intimate with a sizable stage in the front, bar in the back, balcony and seating to the side. Good enough? Let's go! James Damion 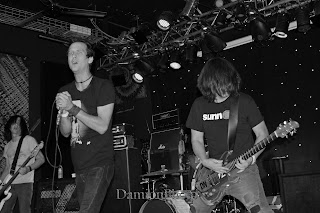 Double Negative opened the night on a spiteful note. I've been listening and compiling records from this Raleigh, NC band for a few years now and was more excited to finally see them than anyone else on the bill. The band more than lived up to their reputation. Lot's of energy and stage presence. The band has just released a new Ep. Unfortunately for Dave and me, we were a day early and there was no copy to be snagged. Seeing them perform live for the first time rivaled my chance to see Deep Sleep earlier this year as highlights of my show going year. I only wish they would have played longer.
Double Negative 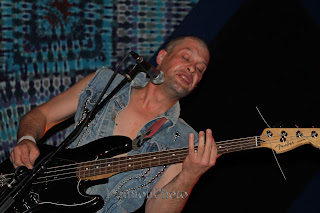 The Spits followed and to be honest, I didn't know the first thing about them prior to that day. The band took the stage each donning Ronald Reagan masks conjuring memories of the movie 'Point Break'.
The bands drummer Wayne Draves started things off by splashing his drums with lighter fluid and setting a small fire. Though the fire was about as  inspiring as the stone henge featured in Spinal Tap. It stunk up the place pretty bad. Moments later the fire was out, the masks were off and The Spits launched into their set. Earlier that night Vinnie from Mint Tone records described them as The Ramones playing Misfits songs or The Misfits playing The Ramones. I guess that's a pretty accurate description. Personally, they reminded me of a typical pub band. I liked their gritty, dirty vibe but can't say they interested me enough to listen any further.
The Spits 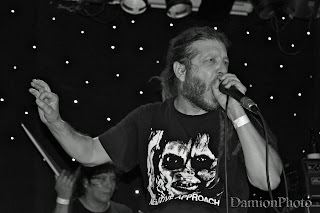 What was already turning out to be an amazing night of seeing old friends and enjoying stellar music in a pretty intimate setting was about to come to a head as OFF! made their way to the stage. I was feeling a sudden sense that I had come full circle as far as my Punk life was concerned. Some of my earliest memories as a young teen finding his own identity was hearing my first Black Flag album and putting the needle to the record and the life changing significance of having my mind blown back by the Circle Jerks 'Wild in the Streets'.

Whenever I think of OFF! I can't help but think of attending the opening night of 'American Hardcore'. Towards the very end of the movie Keith Morris wraps it up with "It's over." "It's been over for a long time." Honestly, with the massive amount of reunions, rockumentaries and masturbatory worshipping of the past. It can be debated. Regardless, the love for the music, the angst and aggression and angst refuses to go home.

As the band launched into it's apocalyptic set I felt the music wash over me and bring me back to a time of mosh pits, stage diving and wild abandon. The entire band was in great form and proving that the music and that sense of alienation and not quite fitting in with the accepted norm never leaves. No matter how old we get, we seem to maintain that universal bond. Keith was in great form walking a fine line between singer, entertainer and master of ceremonies. Putting every ounce of bitter passion into the set while engaging the crowd and making everyone feel as if they were part of the family. It was a great  set that topped off a great night. I can't wait for my next opportunity to see OFF! as well as my next show at Mexicali Live. JD