This week Maxwells and Dromedary Records are due to host Camelfest 2011. A two day event that will feature twelve of the areas best acts...all coming together to raise money and awareness for the Roots & Wings foundation. I managed to steal some time from Dromedary's head honcho Al Crisafulli to talk about the event and the worthy charity. Here what he had to say...James Damion 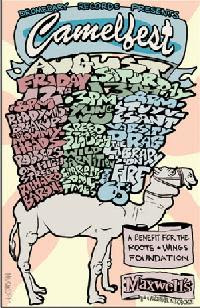 James: Judging from last nights conversation you've been getting your share of butterflies about this weekends event at Maxwells.
How are you holding up?

Al: I always get antsy when we do a show.
We don't do them very often, so when we do, I like to turn them into events - I feel like I owe it to the club and the bands to bring in as many people as possible, and I feel like I owe it to the people to put together the best possible show for their money.
This one - twelve bands over two days - is the biggest one we've done, and it's coming at a time when larger festivals are falling apart all over the area. Just in the last few days, three different area festivals have been canceled - including one that was scheduled for this weekend!

James: Give us a little background on Camelfest and of course, Roots & Wings.What inspired you to get involved with this specific charity?

Al: Well, we're Dromedary Records, and a dromedary is a type of camel. Since all the bands are either on our label, friends of ours, or bands we love, and since we were hoping to get at least a LITTLE bit of promotional mileage out of it, we wanted a camel-centric name.
We started calling it "Camelfest" and it stuck. At first I hated the name, but it's growing on me as I hear people talking about it.

As for the charity, it's pretty simple, actually. Dromedary is a labor of love for me, I do it because I love turning people on to new bands, but I also like the idea of using it as a platform to amplify our own voices with respect to raising awareness for various causes we support. My wife Sandy and I do a lot of volunteering with kids. When I learned about Roots & Wings, I realized that this group - young adults in the foster care system who are about to "age out," is not a group I'd ever thought of before. We have a foster care system that's designed to help these kids, but in some cases, the system fails - and when it does, it fails big, as a lot of these kids wind up homeless, or in prison. Roots & Wings helps pick up the pieces and get some of these kids on the right track.

James: You totally lost me on the Camel analogy. I've never seen you or any Dromedary band sporting humps or spitting dates at deserving tourists. (Although those would be a neat tricks.)

Al: Though I can spit dates, the name is more a reference to how I wear my pants.

James: What percentage of the events earnings are going to the charity?

Al: All of it. We'll also be accepting donations on behalf of Roots & Wings at the event, and some portion of the proceeds from the sales of our next six CDs will go to them as well.

But this is much more about raising awareness than money.

An organization like Roots & Wings needs private donations to exist, and one Camelfest can only do so much. What we're hoping to do is spread the word that the organization exists, serves a worthwhile goal, and needs support from within the community it serves. Already we're seeing some of that, as artists we approached about Camelfest are beginning to do additional work for them on their own, and hopefully the press coverage and the event itself will serve as a springboard to help raise the organization's profile even further.

James: Are you hoping to make this an annual event?

Al: That's a goal, yes. I'd like to make it bigger and always supportive of a charity that does its work here in New Jersey, directly in our communities.

James: Tell me about how the lineup came together.

Al: That was the most fun part of the project. Basically, I made up a list of area bands that I loved, sort of an "If you were hosting a music festival and could choose any 12 area bands to play it, who would they be?" I included some Dromedary bands (but not all), and then started reaching out and introducing myself and explaining what I was trying to accomplish.

There were a few instances where the bands were unfamiliar with Dromedary, or had other engagements planned, but for the most part, every band we asked that was available was willing to contribute.

In terms of the diversity of talent, Dromedary isn't really associated with any particular style of music - we're basically a label that releases interesting guitar-based pop songs, and that encompasses a pretty wide variety of styles. Hence you get a band like The Mommyheads on the same tiny label as a band like Stuyvesant.

We also wanted to pay tribute to the immense history of indie rock in New Jersey, and so it's an honor to be able to present great artists like Yung Wu, Richard Barone and Speed the Plough. We've really got 25 or 30 years of indie rock represented in just 12 bands, from legends like The Mommyheads or Ben Deily of Varsity Drag, to dynamite younger bands like Robbers on High Street.

James: What made you choose Maxwells?

Al: There aren't enough superlatives to describe what Maxwell's represents to me. From the very birth of "alternative" music in the state, with all its highs and lows over the years, the three things that have always been there have been Maxwell's, Bar/None Records, and WFMU. All three have enjoyed strong national reputations, but have remained loyal to local artists and in a lot of cases, served as an incubator for this fertile arts scene that we've enjoyed here over the years. Maxwell's will always be my first choice.

It's an honor to host shows at the same venue as the artists that helped shape my own musical taste played, and as long as they keep letting me back in the place, I'll keep coming.

James: Will you be filming the event for proper documentation and future fund raising?

Al: Since it's a charity event, I'm trying to avoid spending like a drunken sailor so that we actually have a chance of making some money for

Roots & Wings. As such, I'll probably bring my little handheld video camera and that's it. We do have plans for audio recording, however.

James: Okay Al, here's your shot at the Soap Box. In getting the word out. Tell us why this is a can't miss event.

Al: These are twelve outstanding bands in two days, representing the finest in independent music spanning three decades. We're kicking things off with Richard Barone, who was in the first band that ever played at Maxwell's - and ending with Stuyvesant, arguably the best band in New Jersey right nowIn between, every single band on this bill has a compelling story and is worth seeing in their own right, and we've brought them all together to perform on a legendary stage, in a venue with a fantastic menu and affordable beers, and it's all for a great cause. I feel safe in stating that there won't be a better lineup at any club in the area this year, and if you don't go, you'll have missed it, and then what will you have to show for this weekend? You mowed your lawn? You went to somebody's boring barbecue?

Plus, Benny Tudino's pizza is just up the street.

James: I couldn't have said it better. 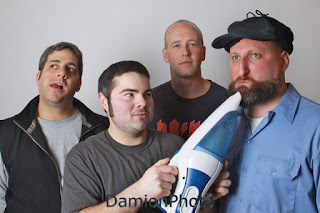