On the first release of Matthew Wilson (singer Set Your Goals) Calaveras Records.
He successfully turned to the Kickstarter platform to release a limited 10th Anniversary limited 10' vinyl edition of  Set Your Goals 2004 demo.
Though I never really followed the band, listening to a band in their early stages always helps when forming an opinion about a band and where they might be going.
Hearing this made me realize they were so much more than a CIV remake or redo. 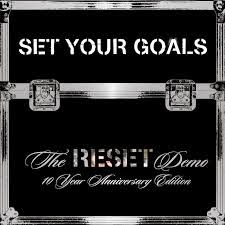 Positive and uplifting from the start with a sound that found influenced by everything from Hardcore to Emo to Pop Punk. Each of the six songs from the original demo left a lasting impression on me with
"How 'Bout No, Scott" being a personal favorite.

I was excited to see the cover of Jawbreaker's
"Do you still hate me?", until I realized that despite the largess of anyone's love or appreciation of the band. Any attempt at covering or paying tribute to Jawbreaker is only going to make you sound weak and unworthy. This is the only track I can honestly say I did not like. By now, I'd imagine anyone reading this would, ten years later, be more than familiar with the bands sound and direction.
For those who haven't, Set Your Goals fit nicely somewhere between Gorilla Biscuits and Saves the Day. The vinyl edition comes on green splatter vinyl in a 10' fold out cover that opens up to lyrics, liner notes and a collage of images and flyers. "The Reset Demo" also features a digital down for all you MP3 enthusiasts. I highly recommend this.
James Damion

Calaveras Records Get it Here
Posted by James Damion at 1:32 PM