I was always curious about the band Atari. To be perfectly honest, I heard little to nothing about the band during their existence. But if you know me, you'll know that I am a complete sucker for anthology's and a strong believer that documenting some of the smaller, lesser know bands is just as, if not more important than our devotion to the more know and celebrated acts. 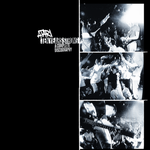 "Ten Years Strong" features the entire recorded history of the Pennsylvania straightedge skate band. The bands demo, "We'll be Fighting" 7',
"Too Tired to Drive Home" 7', the Split 7' with Carpenter Ant and their contributions to various compilations including, but not limited to
"Rebirth of Hardcore". Released on Germany's Prügelprinz Records. The discography, now on vinyl, includes lyrics and very heartfelt liner provided by the bands vocalists Brett Barto. Though Atari's music can't be described as anything more than your run of the mill straight edge Hardcore. It warrants a listen. Though I can't say I really liked much of what Atari produced. I'm glad I finally had the chance to give it a thorough listen. I'll let you be the judge. JD

Buy it Here
Posted by James Damion at 4:02 PM